Offered by Willow Dale Farm (as agent) for Korilya Stud owner Ellie Giles, she is also a half-sister to the LR Fairetha Stakes winner Red Can Man.

“We actually paid a little bit more than we thought we would have to pay,” Nutt said.  “I’m really happy with the one that we got.  I really liked her and there’s plenty of upside going forward.

Mornington trainer Matt Laurie secured the second top-priced lot when going to $200,000 for the Western Breeders Alliance colt by Winning Rupert from Bitter Twist.  “I thought he was a standout,” Laurie said.  “I obviously had to bid pretty hard to get him.

“He’s a really forward, well-muscled and well-balanced colt – a typical early looking style of horse.  His physical attributes really matched his page and I’m thrilled to get him.”

Singapore-based Constance Cheng, buying under the Thoroughbred Owners Association and Sports Trust banner, purchased the filly who is a half-sister to G2 Hill Stakes winner Lamasery.  “I thought she was the top filly of the sale,” Cheng said.  “I really liked her as a type and it was great to be able to buy her off Yarradale Stud as I have had a lot of success with the stock from the farm.”

Turnover reached $8.84 million on Day 1 at a record average of $71,302.  The clearance rate was a disappointing 73% but Magic Millions Managing Director Barry Bowditch expects it to improve over the next 24 hours.

“It was a really solid day’s trade,” Bowditch said.  “And as the results indicate, everyone was playing a part – from the locals to our interstate and international visitors.” 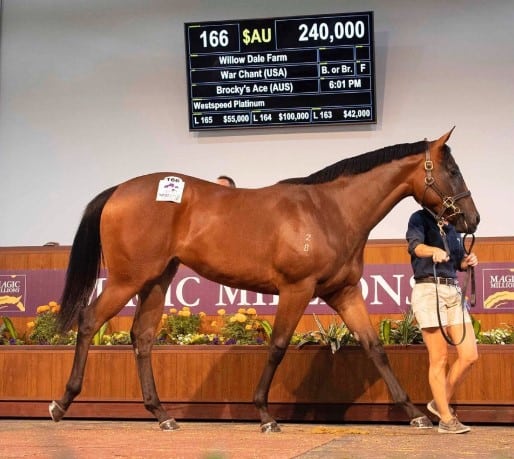