Big Watch on Watch Me Dance

Watch out for Watch Me Dance in the G2 Karrakatta Plate (1200m) at Ascot on April 4.

That was the message from trainer Steve Wolfe after his I’m All The Talk filly flew home to win Saturday’s Salinger Plate (1100m) at Ascot.

Watch Me Dance was spotting the leaders a half-dozen lengths at the furlong but arrived in the nick of time to nail Dom To Shoot (Shooting To Win) and Our Danni (All American). She had come from the clouds to win on debut at Bunbury in January prior to a black-type placing in the RL Magic Millions 2yo Classic at Pinjarra.

“She’s always shown us a bit and is a serious filly,” Wolfe said. “We came here today to make sure we had enough prizemoney to get into the Karrakatta.”

Watch Me Dance (2f I’m All The Talk – Coventry To Rio by Oratorio) was purchased by Commercial Bloodstock’s Noel Carter for a ladies syndicate at the 2019 Perth Magic Millions. She cost $34,000 from Mungrup Stud and has now earned $136,700 in prizemoney and bonuses.

“It’s great to have all the ladies involved and they’re so excited,” Wolfe added. “She won’t start again until the Karrakatta unless we decide she does need another run next month.”

Carter went back and bought the younger brother to Watch Me Dance for $60,000 at the Perth Magic Millions last Tuesday. Their dam Coventry To Rio has a colt on the ground by A Lot (USA) at Mungrup Stud and she was bred back to Playing God in October.

I’m All The Talk is a son of G1 Golden Slipper winner Stratum (Redoute’s Choice) and earned a start at stud with an explosive victory in the G3 Skyline Stakes (1200m) at Warwick Farm in 2013.

Apart from the brother to Watch Me Dance, his yearlings were well-received at the Perth Magic Millions. His Book 1 lots averaged $49,167 and several are heading interstate with buyers like Gary Portelli, Gordon Richards, Elite Thoroughbreds and Richard Jolly. 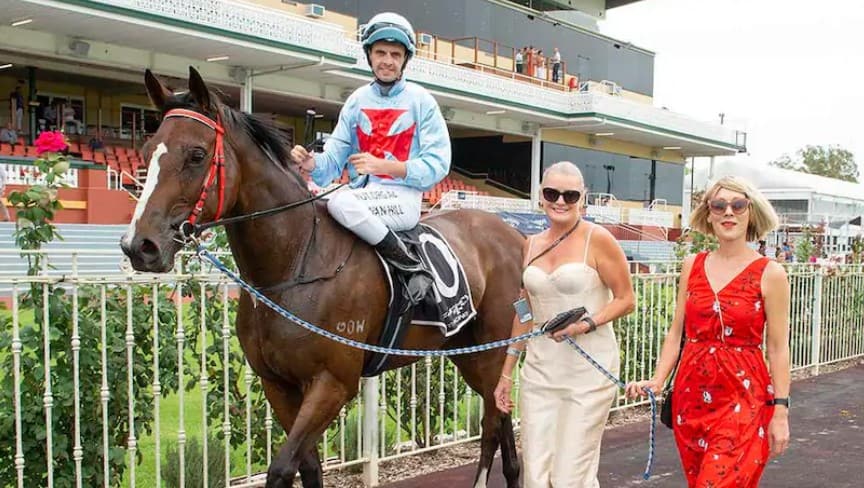