Tommy Blue has gone to another level at Ascot with a decisive victory in the All Flags Signs & Banners Hcp (1200m).

The daughter of Yarradale Stud sire Gingerbread Man filly had been runner-up in the RL Magic Millions 3YO Trophy (1200m) on February 8 and stripped much fitter for her latest assignment on Saturday. She jumped straight to the front and controlled the race under Joey Azzopardi.

“The main issue was to get some weight off when she first arrived,” trainer Simon Miller said. “I gave her a couple of trials and she progressed and got stronger. She should have just about won her first two starts for us but I was surprised how well she won today.

“She’s versatile and there didn’t look to be much speed in the race. I told Joey to back her ability and she speared straight to the lead and really lengthened in the straight.”

Tommy Blue (3f Gingerbread Man – Toss The Boss by Tobougg) cost $20,000 out of Mogumber Park’s Book 2 consignment at the 2018 Perth Magic Millions. She descends from a branch of the Born Rich family and her dam foaled a War Chant colt on Melbourne Cup day last year.

Owners Wes and Sheree Martin collected $80,000 in prizemoney and bonuses for her first win in four starts and Azzopardi believes there’s more to come. “She looked the winner on paper so we kept it simple and it ended up a soft win. I gave her a dig early and then she came back underneath me and settled. She attacked the line and was far too good.”

Miller bought 7 yearlings at the Perth Magic Millions while bidding from a back table that was fanned by a nearby air-conditioner. Among them were Yarradale Stud graduates by City Place (USA) and Gingerbread Man. The latter is a filly from War Chant mare War Tune who is a half-sister to G1 Kingston Town Classic winner Ihtsahymn.

Gingerbread Man (Shamardal) is relishing a best-ever season at stud and his city-winning sprinter Smart Fox returns from a spell at Ascot on Wednesday. He is trained by Adam Durrant for owner Geoff Bull and is related to Gingerbread Man’s Group 1 performer Achernar Star. 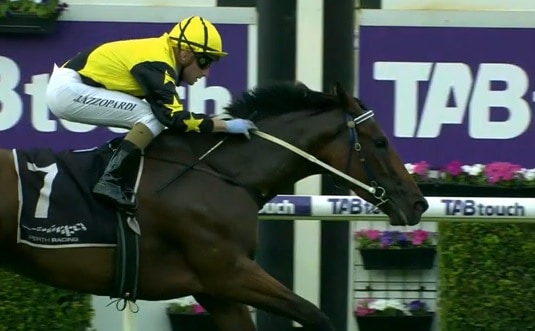