Neville Parnham continued his wholehearted support of Playing God when buying 4 of his 10 yearlings offered during Book 2 of the Perth Magic Millions on Tuesday.

The Ascot trainer spent $368,500 for colts and fillies by the Mungrup Stud stallion over two sessions in the Swan Valley.  He guided Playing God to dual victories in the G1 Kingston Town Classic and prepares his current Group 1 performers Kay Cee and Platoon.

Top of Parnham’s shopping list on Tuesday was the $140,000 Playing God – Reillyanne colt (Lot 260) from Mungrup Stud.  The dam is a NZ-bred daughter of O’Reilly and her only foal to race is Parnham’s recent Pinjarra winner Neat Action (Playing God).

“The Playing Gods are beautiful types,” Parnham said.  “I loved the colt from Reillyanne.  He really replicates Playing God.

“I was underbidder on the brother to Platoon and while there wasn’t a lot between them, I did actually think this one was the pick of his progeny.”

Carter was sitting with trainer Steve Wolfe who prepared Playing God gelding Lordhelpmerun to a Group 3 victory in the 2018 WA Sires’ Produce Stakes.

“To see Playing God’s progeny so well received was fantastic,” Mungrup Stud’s Gray Williamson said.  “It’s been a really fantastic sale.  Not just for us but for the whole WA industry.”

“It’s a really fantastic result,” Magic Millions Managing Director Barry Bowditch said.  “The overall sale gross of $13 million is up from $9.5 million last year and the clearance rate is still climbing at 82%.

“Vendors brought nice horses to the sale and the local buyers got in behind them and supported the Westspeed product.”

Overseas and interstate buyers were also prominent with Parnham, Simon Miller and Pearce Racing the only locals among the Top 10 leaderboard from Book 1. 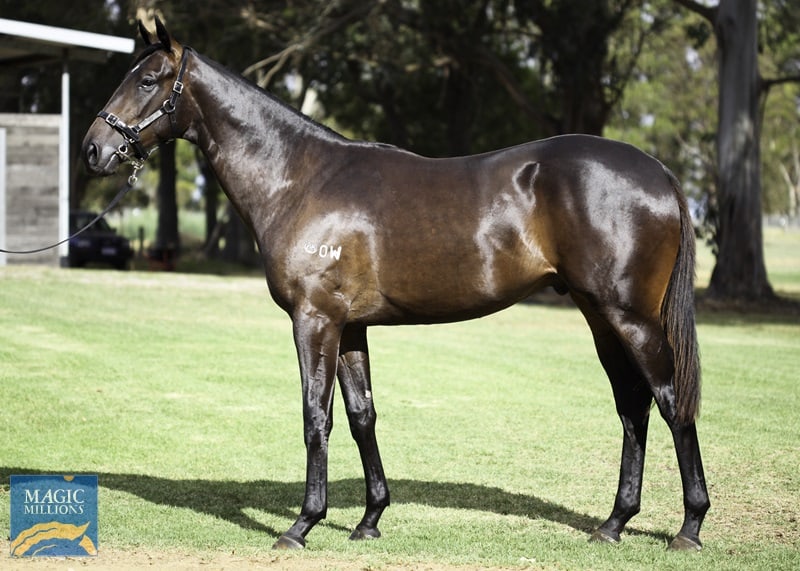