The Swan Valley has been full-on with inspections for the Perth Magic Millions Yearling Sale that commences on Monday at 1pm (WST).

“We got here on Wednesday and it’s been an encouraging mix of WA and interstate buyers on the sale-grounds,” TBWA President Brent Atwell said.  “They were still arriving on Friday even though the temperature topped 40 degrees.

Atwell has catalogued the first yearlings by Lucky Street as a part of the consignment from Western Breeders’ Alliance.  The G2 Karrakatta Plate winning son of Oratorio stands at the Atwell family’s Darling View Thoroughbreds in Mundijong.

“The Lucky Streets have been well received and the feedback has been positive,” Atwell commented.  “The filly from Foo Foo The Snoo (Lot 21) will hopefully give us a good start.  The half-sister to Cryptic Wonder (Lot 144) has also been popular.”

Awesome Rock (Fastnet Rock) completes a full circle for Gold Front Thoroughbreds owners Alan and Sue Olive at the 2020 Perth Magic Millions.  The Breera-based couple bred and sold him for $575,000 at the 2013 Gold Coast Magic Millions but retained a share in a syndicate with Team Corstens.

He won the Group 1 Mackinnon Stakes on Victoria Derby Day at Flemington and the Olives brought him home to stand in Western Australia.  “We always wanted to get him back here,” Alan Olive said.  “He will be good for WA and there’s 17 of them at the Magic Millions.” 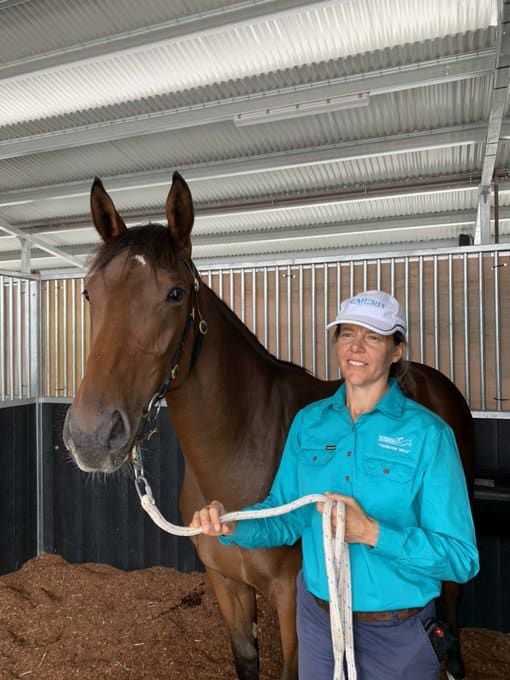 Special Reward provided a last-minute update to his half-brother by King’s Troop at Randwick on Saturday.  The former Perth sprinter won the G3 Southern Cross Stakes and trainer Kris Lees will now set him for the G3 Newcastle Newmarket on March 6.

The King’s Troop – Special Kiseki filly is also a half-sister to Showy Chloe (G3 WATC Sires’ Produce St) and El Rijes (LR Perth St).  She is being offered by Taunton Vale’s Nina Johnston (pictured with Lot 109) in the Swan Valley.  The Dardanup nursery sold Special Reward for $145,000 at the 2017 Perth Magic Millions.

King’s Troop (Redoute’s Choice) is a three-quarter brother to Snitzel and was a class sprinter in his own right.  He routed a Warwick Farm field by three lengths and then ran out of his skin in the G3 San Domenico Stakes.  He shook off G1 Golden Slipper winner Vancouver back at Rosehill only to be collared for a second time by Japonisme.   They were two serious colts but ongoing injuries prevented King’s Troop from locking horns the following season.

Mahuta (Commands) was also the victim of a career-ending setback after a meteoric rise through the grades in Melbourne.  He reeled off five stakes wins that peaked at Caulfield in the G2 Autumn Stakes (1400m).

Resuming as spring 4yo, he was Group 1 placed in the Memsie Stakes behind Black Heart Bart before a pelvic injury limited his career to 16 starts.  “Mahuta was talented and tough and his yearlings have that same size and stamina,” Lynward Park’s Troy van Heemst said.  “And his race record speaks for itself.”

The first Mahuta to parade is the filly from High Aims (Lot 41).  The dam was a Sandown Lakeside specialist for trainer David Brideoake before being sold as a broodmare prospect to WA.

Mogumber Park sire Rommel is another Group winning son of Commands and he has 17 yearlings entered for the Perth Magic Millions.  Mogumber Park has 10 of them starting with the colt from Girl In A Storm (Lot 26) who will be one of the highlights from his home base at Bullsbrook.

Vert De Grece (Ire) has yearlings from a half-dozen vendors at the Perth Magic Millions and among the highlights will be the three-quarter brother to Singapore star Captain Obvious (Lot 172) from Alwyn Park.

Vert De Grece (Verglas) was sold for seven-figures to Hong Kong after finishing second to champion 2yo colt Gleneagles in the G2 Futurity Stakes at the Curragh.  He repaid that with a dominant four-length victory in the G1 Criterium 2yo International at Saint-Cloud.