Gemma’s Son has confirmed his status as Western Australia’s best juvenile by extending his unbeaten career in the RL Magic Millions WA 2YO Classic (1200m) at Pinjarra.

Sent out a $1.40 favourite with bookmakers, the son of Scenic Lodge sire Snippetson was strong to the line after leading throughout and repelling all challengers in the straight.

At the post, Gemma’s Son had an almost two length margin over runner-up Surveillance (Safeguard) while Watch Me Dance (I’m All The Talk) was a further length back in third place.

Saturday’s win was the fourth for trainer David Harrison in the prestigious $250,000 feature – he now shares the training record for the Magic Millions 2YO Classic with Trevor Andrews.  “I didn’t have any worries about the 1200m,” Harrison said.  “I think he will be the perfect Sires’ Produce Stakes horse.

“He will eventually run a mile.  His mother was a staying type who won over 2100 metres.”

He’s shaping as yet another of the Perth Yearling Sale’s best advertisements.  Just under a year ago, he cost Harrison’s Bridge Patrol Lodge stable $20,000 from the Scenic Lodge draft.  “He was a neat, compact and athletic type as a yearling,” Harrison recalled.

The win provided a boost for the Scenic Lodge team as they will present a full-sister to Gemma’s Son as Lot 252 at the 2020 Perth Yearling Sale.  The Snippetson filly is catalogued in Book 2 as was Gemma’s Son and, in a further boost to the second-tier sale, Saturday’s runner-up Surveillance scooped a bonus for his connections.

The 28 part-owners of Surveillance banked $97,500 in prizemoney including a major portion of the inaugural Magic Millions WA Racing Women’s Bonus.  The connections of Watch Me Dance and Janaura, who ran third and sixth respectively, scored the other Racing Women bonuses.

Gemma’s Son is the 14th stakes winner by Snippetson who has a total of 21 yearlings parading over two days in the Swan Valley commencing on Monday week, February 17. 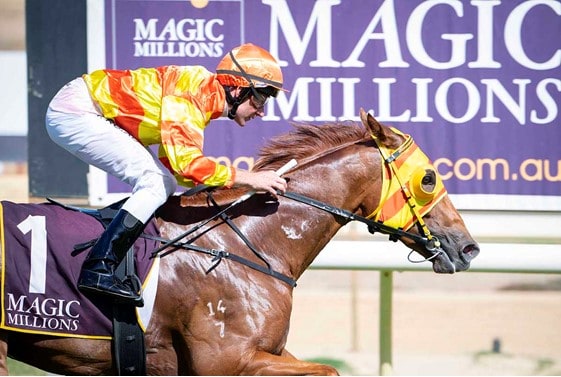