Trainer Michael Lane will give Free Trade a chance to make the grade in Group 1 company following a running double in WA’s premier provincial sprints this campaign.

Free Trade won the LR Pinjarra Classic (1300m) by three lengths on February 23 and he was just as impressive in the LR Bunbury Stakes (1400m) on Wednesday.  Stable jockey Chris Parnham settled him outside the leader Flower Of War (War Chant) before cutting the ribbons rounding the home turn.

It improved his record to 8 wins in 15 starts while clocking 1:22.69s to get within 0.08s of the race record held by Black Heart Bart.

“We will put him away now and get him ready for the (G1) Railway Stakes,” Lane said at Bunbury.  “He’s an amazing animal but the pressure was on today as a $1.65 favourite.

“I didn’t gallop him after Pinjarra and all credit to the horse.  He’s a natural but didn’t start racing until he was a 4yo so he’s still a bit raw.”

Lane won the 2009 Bunbury Stakes with Keytomoney (Key Business) who led them up in that year’s Railway only to get a stitch when Sydney raider Sniper’s Bullet let loose in the straight.

Free Trade is the 14th stakes winner by Trade Fair (GB) who died Alwyn Park in March 2018.  He was bred by the late Harry Capararo and is raced by his son Peter under Canal Enterprises. 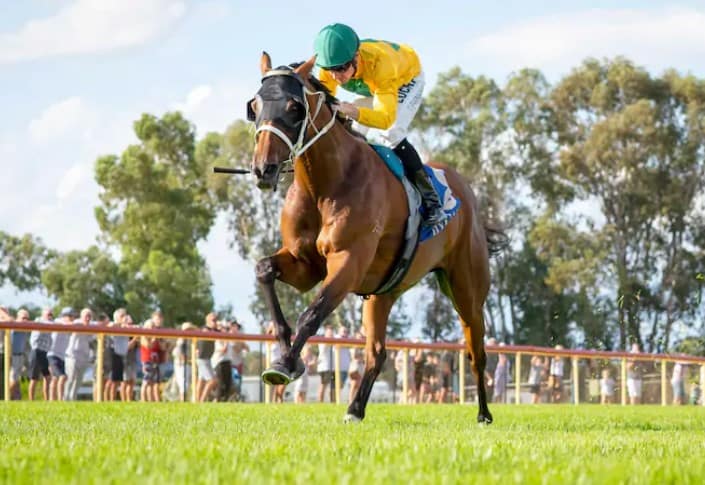