Adelaide trainer Gordon Richards was still celebrating his first Group 1 with Gytrash when paying $55,000 apiece for Mungrup Stud’s colts by Oratorio and I’m All the Talk at the Perth Magic Millions last month.

Gytrash (Lope De Vega) won the $750,000 Lightning Stakes at Flemington two days before the WA Sale and there’s been another update for the Oratorio – Toy of War colt (Lot 121) this month.

Toy of War (Old Spice) won three times at Ascot and added a Ladies Day Cup at Northam for Key Farm owner Geoff Evans who sold her as a stud prospect for $38,000. She has a perfect strike-rate from four named foals topped by Oratorio’s G2 WA Guineas runner-up Outlaw Pete.

Throwdown (Hala Bek) added a feature win for Toy Of War in the Great Southern Cup (1900m) at Albany on March 17. He came from last to nail a narrow victory for Mungrup owners Gray & Jan Williamson, trainer Stephen Miller and jockey Jason Whiting.

Hala Bek, a British-bred son of Halling, was retired by Mungrup in 2018 and his best galloper was that year’s LR Kalgoorlie Gold Cup winner Inject The Venom.

Toy of War foaled a Playing God colt in September and was bred back to A Lot (USA). She is a half-sister to the dam of Under The Eiffel (G3 Sandown Stakes), The Pinnacle (G3 Epona Stakes) and Tower Of Lonhro (LR WA Grandstand Cup).

Gytrash has another WA link through his dam Miss Barley (Fastnet Rock). A former Patinack Farm mare, she was purchased for $4,000 by Perth owner-breeder Justine Erkelens in 2017. 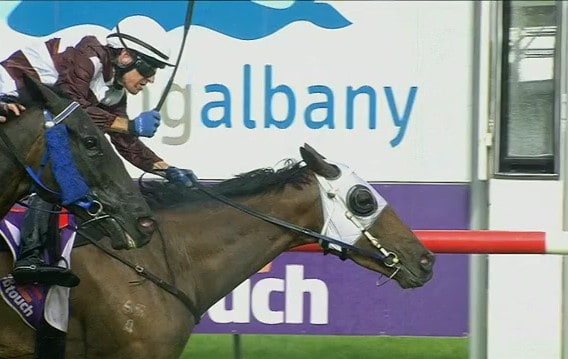