Alwyn Park sire Trade Fair (GB) has been gone two years but his stock were alive and kicking over Easter.

Black Shadow continued his consistent form for Owners-Only Ambassador Rick Hart and trainer Jim Taylor on Saturday.  It was the 5yo gelding’s second win in three weeks over a journey for Hart who bred him by using Trade Fair over Black Vision (Blackfriars).  The mare’s final foal is a 2yo colt by Alwyn Park sire Alfred Nobel (Ire).

Karijini Aurora continued her quick rise up the ranks with a winning hat-trick in the TABtouch Ladies Bracelet (1600m) at Albany on Sunday.  After a first-up fourth at Bunbury on March 4, she got straight down to business in a Pinjarra maiden and then claimed a Class 1 at Ascot before adding some fringe-benefits in the Great Southern.

Her owner Maitland Parker also won a $5,500 diamond bracelet and a free service to Mungrup Stud sire A Lot (USA) who covered his first book for a $5,500 fee last year.

Karijini Aurora wanted to get the job over and done with at Albany and Alan Kennedy, who was taking over from Willie Pike, did well to keep her intact and with petrol in the tank at the end of a mile.

“Maitland named her after the Karijini National Park where he’s a ranger,” Alwyn Park owner John Andrew said.  “He was happy to give her plenty of time and she was already a 3yo before being educated.”

Trainer Summer Dickson is likely to give her a short break before hopefully earning a start in the LR Belmont Guineas (1600m) on June 20.  Trade Fair sired Tradesman to win it in 2015.

“This is still her first prep and she’s come a long way,” Dickson told RWWA.  “She came to me straight from the breakers and when I jumped her out I knew she was going to be a bit special.”

Karijini Aurora is the first foal of Azahi (De Beers) who descends from LR Maribyrnong Trial Stakes winner Hidden Power (New Regent).  She missed to Alwyn Park sire Maschino last season and could be an early cover for A Lot (USA) in September.

Trade Fair mare Shouhou has raced every month this season and she clocked on for a resounding victory in the Rangeview Stud Hcp (1410m) at Bunbury on Easter Monday.  Trained by Steve Wallace at Blackwatch Stud for owner-breeder Cooni Chua, she is from Madam Miyasato (Fusaichi Pegasus) who counts Champion NZ Filly Jennifer Rush (Prince Echo) as her second-dam.

Trade Fair’s Easter haul was pleasing but it wasn’t as productive as the second week in March when he sired the winners of 8 races in 5 days.  “I might be one-eyed but he was a terrific horse and a really under-rated sire,” Andrew declared.  “His progeny respond to kindness and one-on-one care.” 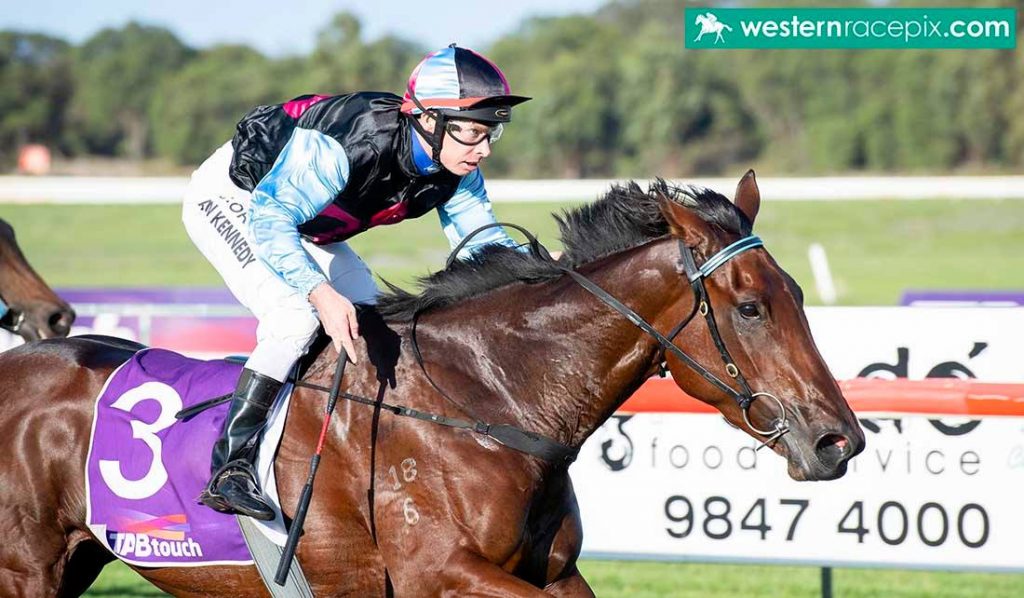