Home Split-decision in The Goldrush

Split-decision in The Goldrush

Sunday’s dead-heat in The Goldrush (1200m) between stablemates Indian Chant and Wocknwoll would have brought back memories for Kalgoorlie trainer Peter Fernie.

Back in 2012, Fernie couldn’t split his gallopers Morsecodian and Wookah when they hit the line locked together in The Goldrush.  Stable supporters had thrown in for a big win on even-money favourite Wookah only to see Morsecodian get the decision after dictating in front for apprentice Kevin Bohorun.

Indian Chant (War Chant) was the stable-elect this year and he let down from last on the corner to collar Wocknwoll (Hala Bek) right on the line.  It was a perfectly-timed ride by Kyra Yuill and completed a four-timer for the team at Cambana Lodge.

Fernie, 54, prepares Indian Chant for his wife Karen and daughter Jemma.  He won an Esperance maiden on the Australia Day weekend and the latest victory improved his record to 5 wins in 9 starts this year.

Yarradale Stud champion War Chant (USA) sired him from Jestceny (Real Jester) and among her other winners was The River (LR Perth Stakes). 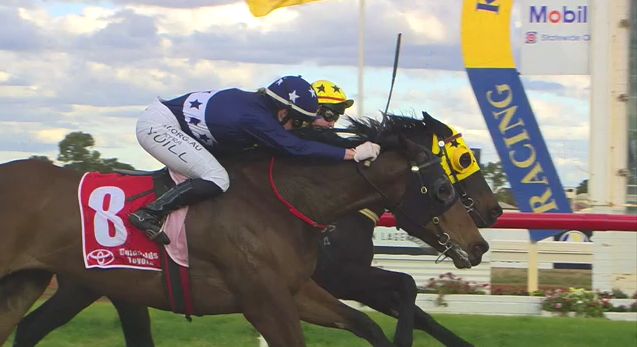