“He was his usual self yesterday but had passed away when I checked his paddock this morning,” Alwyn Park owner John Andrew said on Monday.  “It’s a sad day but he did have a great innings.”

Palace Reign (pictured) will be laid to rest alongside Trade Fair (GB) at the Serpentine stud which he called home for almost all his life.  “He was born at Fairfields Stud and came here as a foal at foot,” Andrew recalled.  “He was beautifully-bred by champion sire Beau Sovereign and his dam Brechin Castle won a stack of races including the Champion Fillies and WA Oaks. 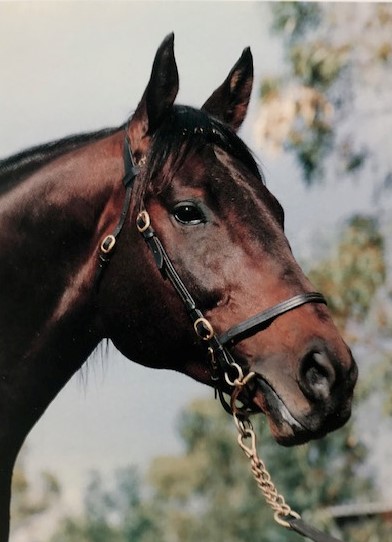 “I took him to the 1991 Yearling Sale and there was a $55,000 reserve on him.  The bidding stopped $5,000 short and the managing owner Mike Scaffidi told me to bring the colt back home.

“I broke him in and sent him to Len Morton for his first prep at Ascot.  The Karrakatta was a Group 1 run before Christmas back then and he finished third despite being shin-sore.

“Mike and the other part-owners – Bill Moffitt and Lou Ligovich – transferred him to Lindsay Park and he won the 1992 Caulfield Guineas on heavy track.  David Hayes was bullish about his chances in that year’s Cox Plate but he went down in a three-horse fall with Naturalism and Sydeston.

“He came out of it with bone chips but recovered and won a Memsie Stakes and Feehan Stakes the following year.”

Hayes gave Palace Reign a ringing endorsement when he bowed out with a placing in the JRA Trophy at Moonee Valley.  “He showed the same fighting qualities as Better Loosen Up and I’m sure his race record would have been similar without that injury.”

Andrew had always vowed not to stand a stallion but he made an exception with Palace Reign.  “He ended up siring his fair share of winners without ever being a leading commercial stallion.  His best was Finito who won a Bunbury Cup and Strickland Stakes for Neville Duncan’s brother Ian.

“I was still using him as a teaser until recently and he was loved by everyone here.  He was quite a character and it’s funny that he won a Caulfield Guineas on a bog track.  He would always walk around a puddle here instead of getting his feet wet!

“And he would whinny every morning to let us know he was still around.  We will miss him.”