Lord Lonsdale led home a quinella for Alwyn Park sires when racing returned to Ascot on Saturday and it was also the first leg of an early double for the Serpentine stud.

The Kieran McDonagh-trained Lord Lonsdale (Maschino) controlled the TABtouch Westspeed Platinum Maiden (1400m) for a convincing victory over Trade Fair Express (Trade Fair).  He had been sidelined for ten months since a debut fourth at Pinjarra but was confidently backed into an even-month favourite.

McDonagh has a perfect record with Maschino.  He’s trained a half-dozen by the booming son of Encosta de Lago and Lord Lonsdale maintained a 100% strike-rate on Saturday.

“He’s an easy to train and makes me look good,” McDonagh said.  “He’s a big horse with a big engine and his aerobic capacity is huge.  There are big things ahead this season.”

Lord Lonsdale is raced in partnership by Jim and Trish Anderson who stand Maschino with Alwyn Park owner John Andrew.  His dam Apheta (Galileo) is a close relation of multi-state stakes winner Reykjavik and she delivered her final foal – a Maschino colt – in October 2019.

Chloe Azzopardi rated the winner perfectly in front and rated him highly on returning to scale (pictured).  “He was a bit hot before the race but relaxed and settled once they jumped.  He’s got a long stride and really hit the line after I gave him a couple over the hindquarter.”

Double Digit (Demerit) completed the Alwyn Park double for trainer Ash Maley.  He bought the gelding for $10,000 from Alwyn Park (as agent) at the 2015 Perth Magic Millions and the latest win was his 11th in 56 starts for prizemoney and bonuses of $431,230.

It took every metre of the straight for him the collar Paddy’s Shadow in the Amelia Park Hcp (2200m).  “That was huge and it’s his first win past a mile,” Maley said.  “He’s only a little fellow but he dug deep in the last 50 metres.  I told Chris (Parnham) to get cover and he rode a beautiful race.”

Female Agent has a 2yo Demerit filly that cost Paul Jordan $85,000 at the 2020 Perth Magic Millions.  And Taunton Vale’s Nina Johnston has her yearling filly from the last crop by Demerit.

Maschino stands for a $6,600 service fee with Alfred Nobel ($2,200) at Alwyn Park.  His grey flyer Fabergino is being prepped for the G2 Caulfield Sprint (1000m) next Saturday, October 17, and trainer Tiarnna Robertson reports the mare has bounced back from a below-par performance in the G1 Moir Stakes last month.

Fabergino struggled in the soft conditions and also appeared uncomfortable around Moonee Valley’s tight-turning circuit where she was racing under lights for the first time.  “The moment she stepped slow, her race was over,” Robertson explained.  “It was obviously disappointing but we’ve moved on and she’s really bright in herself.”

Robertson is banking on a much better run at Caulfield before her Melbourne grand-final in the G1 Darley Sprint (1200m) at Flemington on November 9. 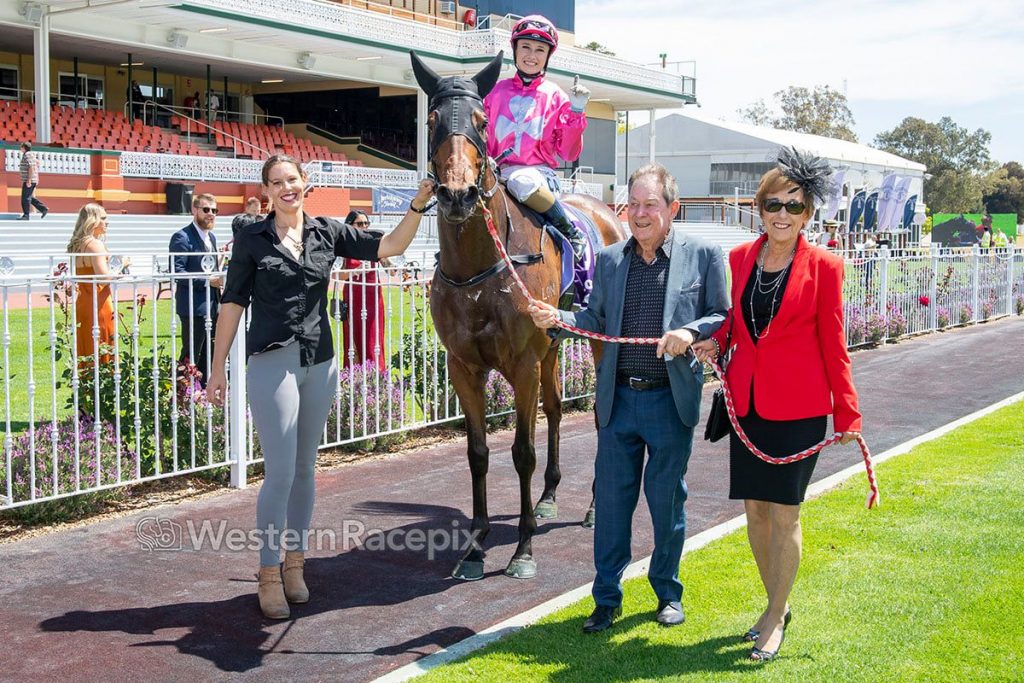