Home Winning kick by Son of All American

Winning kick by Son of All American

All American sired his fourth 3yo winner in a week with Kick A Goal Son at Northam on Thursday.

All four are from his first crop conceived at Geisel Park Stud.  Lightly-raced filly Holyoake started the purple patch at Ascot last Wednesday with the promise of more to come for trainer Brett Pope.  She can double up in the Devil’s Lair Hcp (1400m) on the Melbourne Cup day card at Ascot.

All American just missed a winning treble at the Northam Cup meeting last Sunday.  On an afternoon of competitive racing, he struck twice with Life For A Life and American Choice in the Avon Valley.  It could have been three but for Hoover being bloused out as a $2.50 favourite.

Life For A Life (3g All American – Love Of My Life by Celtus) nailed the Triple M Maiden (1100m) by a nose under Joe Azzopardi.  “He was headed at the 150m mark but fought back strongly,” Pearce Racing reported.  “He was thrown in at the deep-end on debut at Belmont in September before putting the writing on the wall when beaten a neck second-up at Northam.”

A homebred for Distinct racing’s Geoff Evans, he’s the only foal from an unraced daughter of Valparaiso (Bianconi) who won a LR Matchmaker Classic at Ascot in 2006.

Trainer Simon Miller prepared American Choice to claim the TABtouch Hcp (1300m) after duelling down the straight with her stablemate Nuhad (Dream Ahead).  She was educated by Dion Luciani before going to Miller for an Ascot win last December followed by a black-type placing in the LR Supremacy Stakes.

American Choice (3f All American – Elle Choisit by Choisir) is a homebred for Geisel Park owner Eddie Rigg and he also retained her 2yo half-sister by Vert De Grece (Ire) who has been named Green Choice.

Kick A Goal Son (3g All American – Our Trade Secret by Trade Fair) was facing the starter for the second time yesterday and he didn’t need to be asked twice to win the Vinoque Nebbiolo Rose Maiden (1000m).

After leading into the straight, he went further ahead with an immediate turn of foot when popped the question by Mitch Pateman.  Raced by a large syndicate with Jason Miller, he was bred by Geisel Park from a sister to LR Scenic Blast Stakes winner Cool Trade.

All American won’t have a 2yo division in WA this season after covering a one-off book at Chatswood Stud in 2017, however, Geisel Park manager Conor Dunlop will shortly begin prepping his latest crop of yearlings for the 2021 Perth Magic Millions.

“We’ve entered some very impressive young ones by All American,” Dunlop said.  “There are a few standouts including the colt from Real Glow and the half-brother to Devine Beast who is having a break after winning three in Kalgoorlie.

“We have a lovely Manhattan Rain half-sister to Street Fury who won twice at Ascot and was only beaten a length by Epic Grey in the Magic Millions Trophy.”

Geisel Park also pin-hooked new-season yearlings by Playing God (2), I’m All The Talk and Oratorio at the Mungrup Stud Dispersal in August.  The Playing God brother to Group 1 galloper Platoon cost $80,000 and he will be an eye-catcher in the Swan Valley come February.

One yearling not going to the Perth Magic Millions is the sister to All American’s G1 Queensland Derby winner Dark Dream.  NSW breeder Mary-Ann Basson sent their dam Buchanan Girl (Lion Hunter) across to Myalup and was over the moon when the mare delivered a filly in October last year.

Basson sold Dark Dream to clients of Hong Kong trainer Frankie Lor for $2.5 million following his classic victory and won’t be parting with his baby sister. 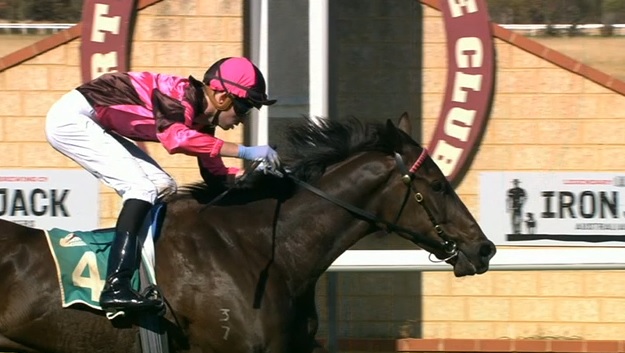