Home Another for Placid Ark for War Chant

Another for Placid Ark for War Chant

Yarradale Stud champion War Chant (USA) sired a second winner of the LR Placid Ark Stakes (1200m) on Saturday and they don’t come as dominant or as popular as Chantorque.

On a memorable day’s racing at Ascot, the Russell Stewart-trained filly tracked the leaders and then waltzed away to win as she liked.  The margin was a length and change but it could have been more if Shaun McGruddy had asked her to extend from minor placegetters Charleton Eddie (Shooting To Win) and Mystical View (Canford Cliffs).

War Chant has now sired 44 stakes winners and among that total is 2018 Placid Ark winner Dance Music.  “I thought she was a good thing today,” Stewart said after watching his filly complete a hat-trick at Ascot.  “It was a great ride by ‘Shooter’ and I can’t thank him enough.”

Queenslea Park breeder Allan Morton leased Chantorque to Stewart and a syndicate of several first-time owners (pictured).  “Allan didn’t give us an option to buy because he wants to keep her as a broodmare.  We’re just ecstatic to be able to race a filly of her quality.”

McGruddy has been aboard Chantorque since a winning debut at an Ascot midweek meeting in May.  “She did it easily today,” he said.  ‘Rusty’ declared her after she worked really well on Tuesday morning.  I wasn’t that confident but when she relaxed in the run I knew it would be very hard for the others to hold her out.”

War Chant (Danzig) won a G1 Breeders’ Cup Mile at Churchill Downs and began shuttling from Three Chimneys Farm in Kentucky to Yarradale Stud in 2011.  He made the move permanent in 2014 and is currently covering at an $11,000 (inc GST) service fee. 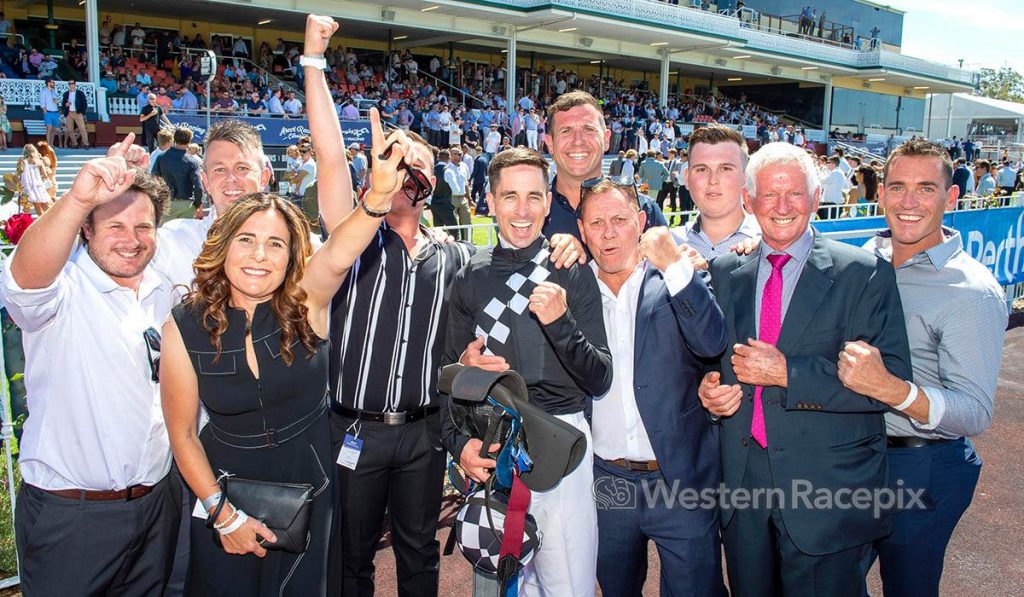