Aconite powered home to score an easy victory in the Salinger Hcp (1400m) for trainer Brett Pope and apprentice Hannah Fitzgerald.  The daughter of former Yarradale sire Discorsi is a Namerik Thoroughbreds homebred for Alan Bansemer and Maya Scott.

“She backed up a couple of times at Belmont but her last run there was below-par so we gave her a break,” Pope said.  “She freshened up nicely and it was a no-brainer to come here today in a lower grade with the claim from Hannah.”

Aconite has won 5 times and been placed on another 11 occasions in 34 starts for prizemoney and Westspeed bonuses totalling $236,995.  She had been passed-in by Namerik after failing reach a $20,000 reserve at the 2016 Perth Magic Millions.  Her dam Truancy (Akhenaton) is a half-sister to Namerik’s G2 WA Guineas winner King Saul (Flying Pegasus).

Discorsi (Galileo) covered five books at Yarradale and his best was Man Booker who was retired following the G3 Asian Beau Stakes (1400m) last week.  A long-time Perth favourite, he earned $1,116,680 in a career highlighted by victories in the G2 WA Guineas and LR Eye Liner Stakes in Queensland.

War Chant mare Express Time brought up the Yarradale double with a commanding four-length victory in the James Squire Hcp (1000m).  The lightly-raced grey box-seated off a lively tempo before clearing out in the straight for Brad Parnham.

“I’ve always had a pretty good opinion of her but she’s taken time with growing pains and sore shins,” trainer Neville Parnham said.  “She’s also starting to settle now whereas she just wanted to bolt last campaign.  She’s still highly-strung but is starting to show all that ability on raceday.”

Express Time was bred and sold by Yarradale Stud owner Ron Sayers for $110,000 at the 2018 Perth Magic Millions.  He kept a share with Santo Guagliardo, Bob Pearson and Parnham’s wife Carol.

War Chant (USA) sired her from Even Astar (Kendel Star) who was a Listed winner of the Belgravia Stakes and Burgess Queen Stakes in 2010.  Her latest foal is a yearling full-sister to Express Time. 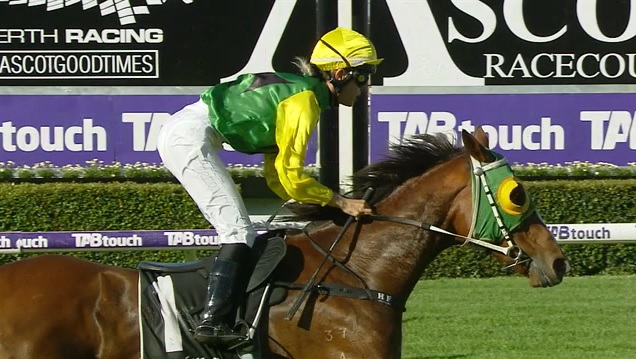