The Maschino mare produced another powerful gallop under the steadier of 60kgs to defeat Sword of Mercy (Sebring) and Pandemic (Sepoy) by over a length.  Trainer Tiarnna Robertson confirmed the grey speed-machine would be set for the G1 Lightning Stakes over the same track and distance on February 13.

Fabergino will attempt to become the fourth Western Australian raider to pocket the Lightning purse following Placid Ark (1987), Scenic Blast (2007) and Miss Andretti (2009).  The Kensington Stakes advanced her record to 11 wins from 17 starts with earnings of $711,550 since an eye-catching debut at Ascot in April 2017.

“She loves the 1000 metres, she loves the straight, she loves Flemington and hopefully if the weather permits we can tick four boxes on the day,” Robertson said.  “She was cruising today.  Doing it easily.  And Jordan (Childs) rides her perfectly.”

Fabergino is a first-crop daughter of Alwyn Park stallion Maschino (Encosta De Lago) and is raced by a partnership that includes her breeder Jim Anderson and several friends based in England.  Anderson also raced Maschino and bought her dam Miss Razyana (Danzero) for $36,000 at the 2013 Magic Millions National Broodmare Sale.

Miss Razyana has a 2yo Maschino filly named Faithful Miss with Peters Investments.  She has a colt by Maschino foaled in September and was covered by him again in October.

Childs claimed Fabergino is still improving.  “She’s pretty unique.  She’s got her own style,” he said.  “She finds a nice rhythm and is able to sustain a high-cruising speed.  You think she’s out and then she finds that little bit extra at the end again.”

“You can’t get into a wrestling match with her.  You’ve always got to let her do her own thing.  She deserves her chance in the Lightning, for sure.” 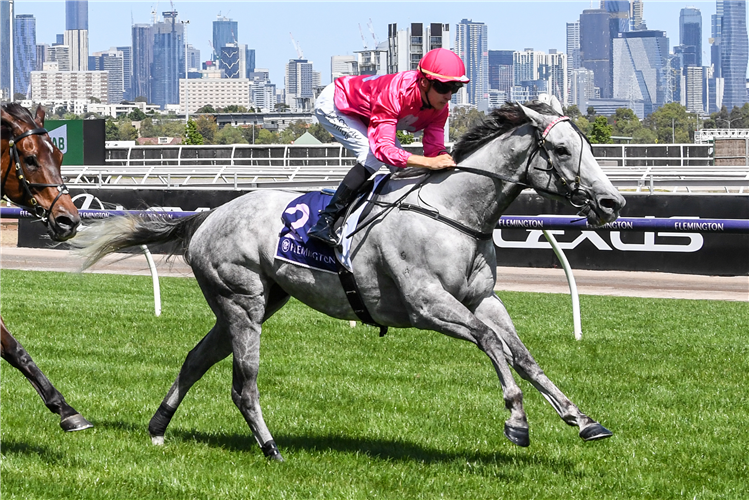