The G3 Manfred Stakes (1200m) at Caulfield on Saturday marked the autumn return of last season’s Group I Blue Diamond winner Tagaloa, but at the winning post he could do no better than third behind a pair of Deep Field colts in Portland Sky and Aysar.

The Matt Laurie trained Portland Sky won the G3 MVRC Red Anchor Stakes in the spring, but was clearly out of sorts when finishing an out of character last in the G3 BRC Vo Rogue Plate on January 2 at Doomben.

Sent back to Melbourne after that disappointment and freshened up for this assignment it was the real Portland Sky that stepped out on Saturday, leading all the way for Luke Currie to score a three-quarter length win over black-type bridesmaid Aysar.

“I’m happy to put a line through his run in Queensland as he trialled beautifully last week and we were very happy with him coming into today,” Laurie said.  “He’s got good tactical speed.  He can relax and he’s got a good sprint.

“He’s always shown us plenty right from being a young horse.  We will no doubt get the opportunity to run in something better.”

Consigned by Alwyn Park Stud, as agent for Anita Vale Stud, Portland Sky was purchased by his trainer for $85,000 at the Perth Magic Millions and has won three of six starts earning over $240,000 in prizemoney.  Portland Sky is the first live foal of the Shrewd Rhythm mare Sky Rumba, a half-sister to multiple stakes-winner London Line out of a half-sister to triple Group I winner Scenic Shot.

Dawson Stud will offer the yearling half-sister by Sessions to Portland Sky at Perth Magic Millions as Lot 70. 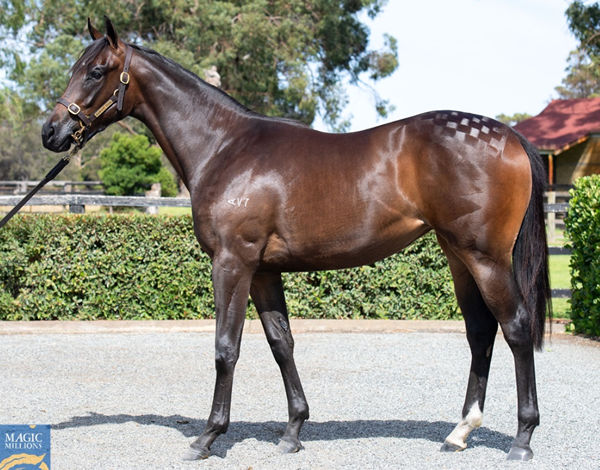