The changing face of racing in Perth went to a new level at the summer carnival when Watch Me Dance and her jubilant syndicate of female owners took centre-stage at Ascot.

RWWA has gone all-out to attract ladies to the races with its ‘Own The Dream’ promotions and Fabergino has maintained that focus in Melbourne.  The locally-bred grey mare and her trainer Tiarrna Robertson have been superb ambassadors for the west in the lead-up to the G1 Lightning Stakes at Flemington next month.

The landscape is also looking all the better in the bloodstock industry with new vendors like Claire Williamson, Jaime O’Bree and Eva Highley poised to make an impact at the 2021 Perth Magic Millions Yearling Sale.

Claire Williamson has hit the ground running with 17 yearlings from Willaview Park and heading her initial draft is the half-brother to summer carnival star Watch Me Dance.

The first-crop son of A Lot (USA) is a readymade racehorse according to Williamson.  “He’s an athletic, flashy colt and is taking the sale prep in his stride.  He’s a pleasure to handle and has the pedigree and the looks that will appeal to owners and trainers.”

Watch Me Dance (I’m All The Talk) won the G3 Champion Fillies Stakes and G2 WA Guineas and her 2yo full-brother Hear Me Sing also showed black-type potential with a debut second at Ascot in November.

Willaview Park stallion A Lot had 18 yearlings change hands at the Mungrup Stud dispersal in August and there are another five lots heading to the Swan Valley.  “His stock look like athletes and they will go early,” Claire predicted. “He’s by Tapit and still holds the USA record for 1400m on turf.”

Williamson was born and raised at Mungrup Stud and she will continue a family link at the rebranded property in the Great Southern.  All bar one of the Swan Valley yearlings are for clients who have backed her to make a success of managing the new-look operation.

Champion 2YO sire Oratorio had 20 yearlings find new homes at the Mungrup dispersal including the filly from stakes performer Danehills Daughter.  She was pin-hooked for $31,000 by Paul Jordan and has been catalogued as Lot 127 for the Magic Millions.

Ruby Racing & Breeding has 11 lots coming down from Kojarena and, apart from local sires like Playing God and Snippetson, there are yearlings by Dawn Approach (Ire), Fighting Son, Caravaggio (USA), Star Turn and Divine Prophet.

The mid-west nursery is owned by Jaime O’Bree and her brother Dan in a family-run business with their mother Bridie.  The signs are positive with the complete draft parading on Day 1.

Jaime got her start with Scenic Lodge and rose to Assistant Stud Manager before branching out last year.

Among the Ruby clients is Group 1 breeder Ellie Giles and their first to parade is the Dawn Approach filly from Ofcourse She Does (Lot 36).

“She’s a striking filly.  A real eye-catcher,” O’Bree said.  “Her dam is a half-sister to Behemoth and she’s a forward type looking ahead to next season.”

The Star Turn – Highly Illustrious (Lot 159) colt is the first foal from a mare by High Chaparral.  “He’s a dude!” O’Bree declared. “He might need time to fully mature but he’s nice mover and light on his feet.”

The O’Bree family sold an Extreme Choice colt for $255,000 through Tyreel Stud’s draft at last year’s Inglis Easter Sale and kept a share in a syndicate managed by China Horse Club.  Named Tiger Of Malay, he was an impressive debut winner of the Kirkham Plate in October after coming from off the pace at Randwick.

Tiger Of Malay was being aimed at the $1 million Golden Gift in November by trainers Richard and Michael Freedman but was spelled with a view to the autumn.

Willow Dale Farm vendor Eva Highley has catalogued 13 yearlings for the Perth Magic Millions and they’re benefitting from her stint in the Hunter Valley.

Highley sold under the Edandale Farm banner before moving east to work for leading horsemen like Attunga Stud owner Brian Nutt.  “It was all valuable experience and so were the contacts I made at all the sales over there.  When I returned home to Waroona, we renamed the farm after my daughter Willow.”

Willow Dale topped the 2020 Perth Magic Millions with a War Chant half-sister to stakes winners Quilista and Red Can Man.  She has been named Aitchdeetee and is being prepared by Bjorn Baker in Sydney.

Highley has a mix of interstate and local sires this year with one of the highlights being the Deep Field – Fast Flowing colt (Lot 136).  He’s a younger half-brother to summer carnival star Dance Music who was last seen winning the G3 La Trice Classic on the Perth Cup day.

Of the locals, there are two good-sized, correct colts by King’s Troop who stands at Oakland Park in association with Gangemi Racing.  The Book 1 youngster (Lot 91), is the second foal from Zafortune who is by Zabeel from G2 Karrakatta Plate winner Brava Fortune.

King’s Troop (Redoute’s Choice) is a three-quarter brother to Snitzel and was Group 3 placed in a San Domenico Stakes at Rosehill.  His first starter Serviceman flew home for a close-up placing at Bunbury on Australia Day.

“We bought King’s Troop off Arrowfield Stud and he’s throwing some unbelievable types,” trainer Chris Gangemi said.  “We’ve got a couple and we’re taking our time as we’ve got a big opinion of them.” 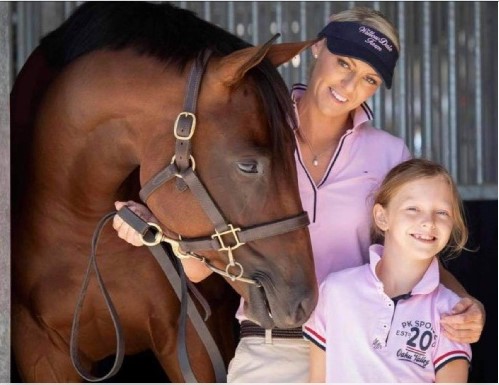