Darren McAuliffe trains No Surrender and he also prepared Abdicator to win the south-west 3yo feature in 2018.  Pearce Racing filly Angelic Ruler made it a running double for Universal Ruler in 2019.

No Surrender lived up to his name with brave victory in the Glenroy Chaff Hcp (1600m) at Ascot on January 9.  He took advantage of the inside alley and was allowed to dictate in front for Chris Parnham before fighting off a wall of late closers.

At the finish, there was no more than a half-length between the first five home but the margin didn’t matter to the winning connections who banked $76,300 in prizemoney and Westspeed bonuses.

McAuliffe knows Universal Ruler and his stock better than anyone having trained him to three stakes wins in Perth before a successful second career at Scenic Lodge where he has sired Impressive stars like The Velvet King, Rebel King, Market Ruler, Military Reign & Abdicator.

No Surrender is the last foal of Dylan Thomas mare Dark Attack whose half-brother Cohort (Scenic) completed a stakes winning double in the 2008 Belmont Guineas and Belmont Classic.

“He’s above average but has an attitude problem.” McAuliffe said following a prior win at Ascot last year.  “That’s weird because the rest of his family have all been lovely quiet horses.”

Universal Ruler followed up with 4yo winning graduates King Cruzer and Universal Pleasure at Ascot last Saturday.  That crop has suffered through lack of numbers, however, their strike-rate is bubbling along at 63%.

King Cruzer broke through in the Amelia Park Maiden (1500m) for part-owner and trainer Justine Erkelens.  Jockey Shaun O’Donnell set a slow tempo and then stole a winning break on the corner to score by two lengths.

“He like a clumsy boy and is still learning.  He’s nothing like his sister,” Erkelens said.  “He has potential and will come good but is still six months away.”

King Cruzer is a younger half-brother to stablemate Friar Fox (Blackfriars) who has earned over $433,005 off Listed victories the Natasha Stakes and Boulder Cup.  Their dam Pearlesque (Statoblest) has a Snippetson filly catalogued as Lot 41 by Scenic Lodge for the Perth Magic Millions on Monday, February 15.

Erkelens is also on a winner with her Fastnet Rock mare Miss Barley who is the dam of Champion Group 1 sprinter Gytrash.  She missed to Universal Ruler in 2019 but Erkelens is hoping for better luck following a September cover to Nicconi at Widden Stud.

Apprentice Laqdar Ramoly repeated the front-running tactics that worked for King Cruzer when he piloted Universal Pleasure to victory in the TABtouch Platinum Hcp (1100m).  She had won a Bunbury maiden on January 3 and trainer Stephan Vahala was quietly confident the next step was there for the taking on Saturday.

“We’re starting to see results with her now,” he said.  “She’s come back a much stronger mare and isn’t such a finicky eater.  She can switch off in the lead and I told ‘Lucky’ to hold on as long as possible.”

Universal Pleasure is the second foal from Amphlett (Rock Of Gibraltar) who also completed a running double at Bunbury and Ascot for trainer Brent Albuino in 2013.  Her 3yo is an All American gelding named Regent Glory and he’s prepping for a debut with David Hayes in Hong Kong.

Numbers are no longer a problem for Universal Ruler having been the State’s busiest stallion for the last two seasons with a total of 227 mares.  He has a dozen yearlings catalogued for the Perth Magic Millions starting with the filly out of Miss Libia from Scenic Lodge (as agent) catalogued as Lot 26.

Miss Libia (Mull Of Kintyre) has foaled three city winners from three to race and the trio – Kelly’s Callisto, Gracie May & Kelly’s Secret – have won 12 races to date for combined earnings over $400,000. 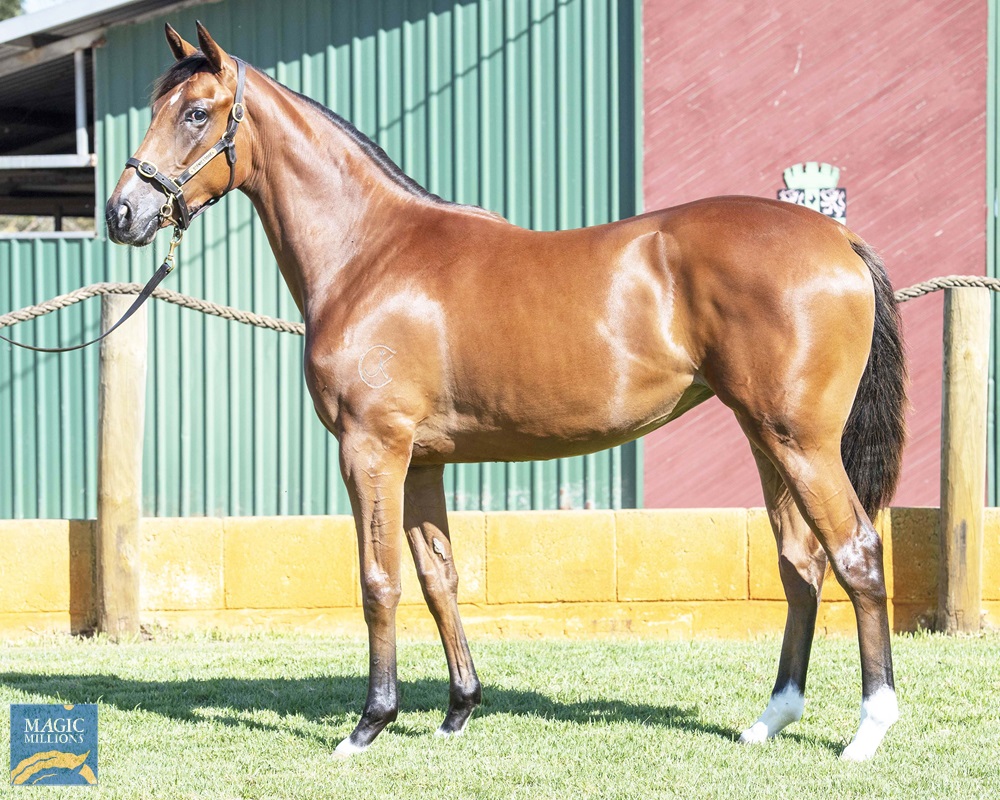