Darling View Thoroughbreds resident I’m All The Talk has taken over at the top of the Australian second-season sires’ table with earnings in excess of $1.50 million.

In an uplifting statistic for a WA-based stallion, he leads big guns Pride Of Dubai (Coolmore), Kermadec (Darley) and Headwater (Vinery) approaching the half-way point of 2020-21.

I’m All The Talk went Top 3 when Watch Me Dance grabbed a Group double at Ascot in November and he kept climbing as All Banter completed a hat-trick in the LR W J Adams Stakes (1000m) at Caulfield on Australia Day.

Mr Have A Chat (3g I’m All The Talk – Living Colour by Oratorio) is also going for three in a row in Victoria with former WA trainer John Price.  He ran fifth on debut in the LR Blue Diamond Preview at Caulfield this time last year and kept developing during another short campaign during the winter months.

He found the winning groove at Werribee and Great Western in January for Grand Syndicates whose black and gold colours are flying with Behemoth.  Price had bid a bargain $24,000 for him at the 2019 Perth Magic Millions Book 2 Sale.

Madame Torio has been a regular contributor for I’m All The Talk.  She looked a talent when running second to Watch Me Dance in a Bunbury nursery last January and trainer Martin Allen has harnessed her explosive speed this season.

A space-job over Snipillicious (Snippetson) was the spur for 5 wins in her next 8 starts and that’s earned connections $321,180 including Westspeed bonuses of $153,040.  The 3yo filly has also banked $10,000 in Epona Scheme credits to an eligible sire in her future career as a broodmare.

“I couldn’t see how they could beat her off that first sectional,” Allen declared after another front-running, panel-beating victory in the Schweppes Plate (1000m) at Ascot on Xmas Eve.  “She’s only small but she’s amazing.  It’s a pleasure training her and she’s got a heart of gold.

“She’s going through the grades and we will get a better idea of where we stand when she’s entered for handicaps in February.  It’s a great ownership group and some black-type would be lovely before we send her to stud.  We could use those Epona credits to go to Playing God.”

Madame Torio’s dam Sorbatorio (Oratorio) is now owned by Oakland Park and she was served by resident sire Sessions earlier this season after foaling a filly by A Lot (USA).

“She’s never been brilliant out of the boxes for me but she musters speed and was never going to lose,” jockey Chris Parham said following the Schweppes Plate.  “I gave her a breather midrace and she gave a strong kick in the straight.”

I’m All The Talk’s second 2yo crop is led by Gorgeous Gossip who closed January with an $82,000 pay-day at Ascot for clients of Paul Jordan.  Sneaky Chance is another 2yo filly knocking on the door after two placings at Ascot for Trevor Andrews.

His 2yo geldings Talkaboutyou (Martin Allen) and Millivoy (Steve Wolfe) have also been touted after last month’s trial wins at Belmont and Albany respectively.

In South Australia, experienced conditioner Gordon Richards is the putting polish on a promising I’m All The Talk 2yo filly named Garrire.  She was a no-brainer for the black-book after running second to Saasmit on debut during a Saturday city meeting at Murray Bridge. 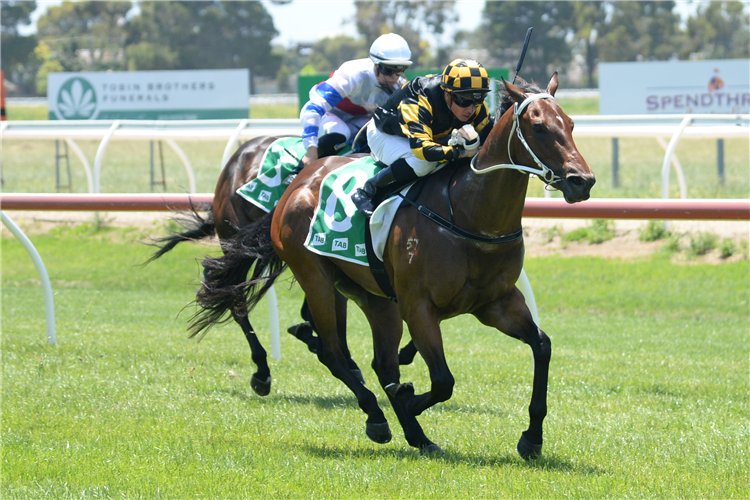 MR HAVE A CHAT