Western Australia’s racing and breeding industries will be praying for a glimmer of hope when Premier Mark McGowan addresses the State’s latest restrictions at a press conference in Perth on Friday.

The five-day COVID lockdown this week has come at a perilous time for many participants with bushfires causing devastation in rural areas north-east of the city.

Pinjarra Race Club is bracing for its second financial hit in the last twelve months after they were forced to run last year’s Cup meeting in front of essential personnel only because of COVID.

“It appears our best possible scenario is having racing resume on Saturday so we can go ahead without a crowd,” Club President Phil Ibbotson said on Thursday.  “We’ve already done our money cold making sure everything was ready for what would have been a big day out.

“We’re in a strong financial position but last year’s Cup cost us a minimum $60,000.  At best, it’s going to be worse this weekend.  Losing the meeting altogether would be disastrous.”

Pinjarra and Magic Millions have developed the Raceday into an iconic festival since it was transferred from Ascot.  There’s more prizemoney than any non-city program on the WA calendar and the sales-related feature races are a major drawcard with stud marquees helping to host ‘Ladies Day’ crowds that top 6,000.

“We have been liaising with RWWA and Magic Millions,” Ibbotson added.  “There’s hasn’t been any locally-acquired COVID cases in the last four days so hopefully the news is positive on Friday.”

Ibbotson and his wife Lindy own Westbury Park near the heart of WA’s breeding industry between Pinjarra and Coolup.  They are partners in Western Breeders’ Alliance which has catalogued a sale-high 32 yearlings for the Magic Millions.

“We’re due to send our yearlings up to the Swan Valley next Wednesday,” Ibbotson continued.  “But as of this morning, the Magic Millions complex was full of horses of all breeds sheltering from the bushfires.”

The Magic Millions Yearling Sale going ahead is also subject to a warning from Premier McGowan that any potential easing of restrictions on Friday “won’t be as much as people might want”.

Magic Millions expects most of the relocated horses to have left the complex by Saturday.  “We have a huge crew of volunteers working with our team and we have started getting the property ready where we can,” Magic Millions WA Manager David Houston said.   “No one will be turned away.   If there are some animals still on the property we will work closely with the owners and come up with a solution.”

Houston also reported Magic Millions is committed to holding a live sale on behalf of WA breeders.  “We are working closely with RWWA on a COVID Safe plan to take to the State Government which can be adapted to multiple scenarios to facilitate a live auction. This type of sale won’t be online.”

Local and interstate buyers can access videos and photos of the yearlings on the Magic Millions online catalogue.  “There’s plenty of information for most lots online,” TBWA Executive Officer Ann Croucher said.  “It’s tough for vendors at the moment, but TBWA will be doing everything we can to support them in the lead up to the sale in the evolving circumstances.” 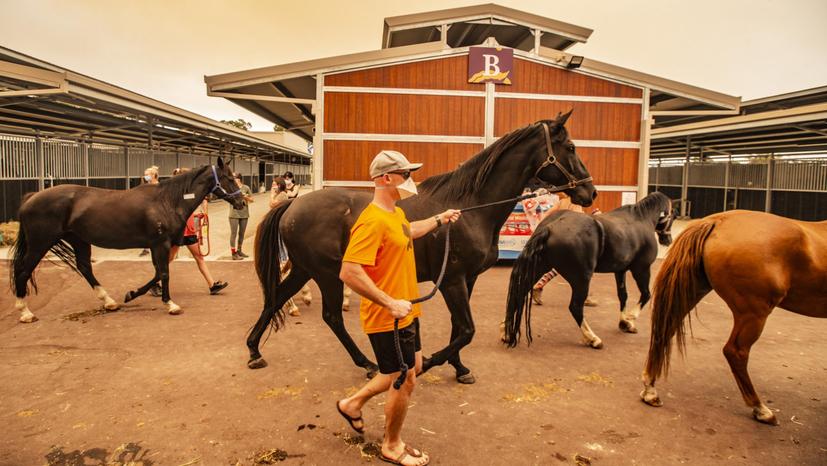