A colt by exciting young local sire Rommel has smashed the Book 2 sale record at the Magic Millions Perth Yearling Sale in the Swan Valley when selling for $180,000.

A full brother to this season’s Perth performed juvenile Pixie Chix, the colt was snapped up by champion local trainer Neville Parnham.  Presented at the sale by Mogumber Park, the colt is from the second crop of Western Australian Guineas winner Rommel and from an unraced daughter of Snitzel.

The record breaking Rommel colt was one of eight yearlings to sell for $100,000 or more during a stunning day of trade with over 95% of yearlings sold to take the two day clearance rate to over 90% and increases across the board.

David Harrison’s Bridge Patrol Lodge went to $130,000 to secure the day’s highest priced filly, a daughter of Playing God offered by Willaview Park. The filly from the 11 time winner Alchemic is a half-sister to three winners.

The great results for Darling View Thoroughbreds continued with their Dissident half-sister to Sydney star Rocketing By selling for $120,000 to in-form trainer Roy Rogers.  Darling View, through the Western Breeders Alliance draft, sold the top priced lot of the auction, the Russian Revolution-Magical Belle colt for $325,000.

“It was a sensational day in the Swan Valley,” Magic Millions Managing Director Barry Bowditch said. “The result endorses the investment of not only what Magic Millions has made, but also RWWA with prizemoney boosts, enhanced Westspeed bonuses and stimulation of ownership.

“The buyers are endorsing this and are getting behind the local industry and supporting the product like never before.

“Obviously it’s fantastic for our vendors who have worked hard to get the horses here and it gives the breeders the confidence to continue to invest going forward.

“It’s been a remarkable few weeks in the Swan Valley.  Full credit to David, Charlotte and the rest of the team who helped during the lockdown, the bushfires and to get the complex ready – a credit to everyone who was involved – it was a herculean job. 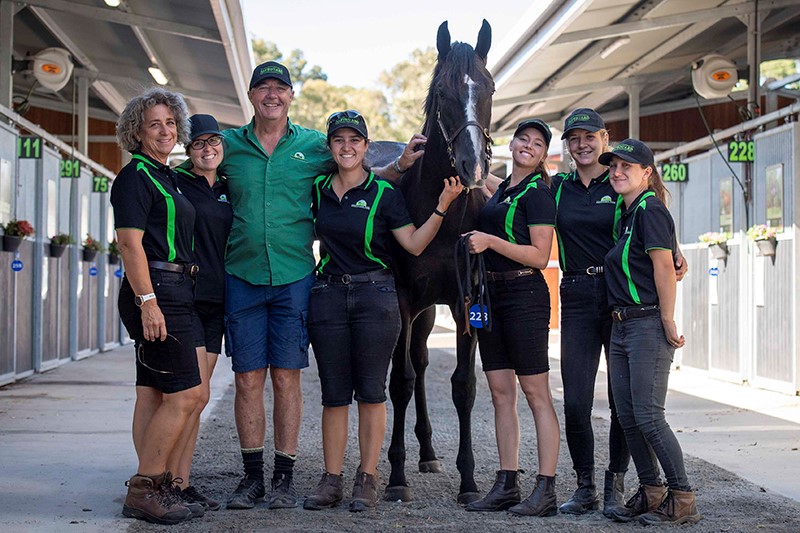 Mogumber Park team with the record-breaking colt by Rommel