Westspeed’s top-tier stallions missed out at Ascot on Saturday when He’s Gold (Rogano) and Hoi An (Longma) won the final dress-rehearsals for this year’s G2 Karrakatta Plate (1200m).

He’s Gold maintained his unbeaten record with a courageous victory in the LR Perth Stakes (1100m) after being eyeballed in front by the $2.70 favourite Storm Whisper.  They settled down to a two-horse war in a frenetic finish that was in doubt until Mitch Pateman lifted the winner right on the line.

A homebred for the Martinovich family, He’s Gold is a son of Not A Single Doubt’s full-brother Rogano who was based at Oakland Park before a sub-commercial fertility rate presaged a transfer to nearby Boallia Farm.

Hoi An was just as impressive against the fillies when she emerged from a pocket just in time to win the G3 Gimcrack Stakes (1100m).  Her sire Longma (Sebring) was bred in the purple being a three-quarter brother to South African Group 1 racehorse and sire Gimmethegreenlight (Aus).

Longma was retired to stand at Mt Hallowell Stud in Denmark but died following foot surgery in December 2017.  He left just 6 live foals.

Ted Martinovich will be double-handed in the $500,000 Karrakatta with He’s Gold and Diamond Blue who finished third in the Perth Stakes.  “They’re both entitled to go that way,” the Group 1 winning trainer declared.  “He’s Gold is tough.  He was headed in the straight but kept fighting back.”

Great Southern trainer Roy Rogers will also have two runners in the Karrakatta in a fortnight after Heavenly Waters (Headwater) finished sixth to her stablemate in the Gimcrack.

Hoi An would have been a certainty beaten but for a last-ditch, escape-act by jockey Shaun O’Donnell which later led a careless riding suspension from stewards.  “Lucky she’s small otherwise she wouldn’t have got through,” Rogers told The West Australian Newspaper.  “I told Shaun to ride her for luck and she delivered.”

Mt Hallowell Stud owner Craig Thompson bred Hoi An by using Longma over M’lady Hallowell (Wanted) who is a from a half-sister to USA Group 1 winner and producer Spinning Round (Dixieland Band).

The WA TAB has a half-dozen youngsters in single-figures for what’s shaping as a wide-open Karrakatta Plate.  The $6.25 pre-post favourite is Pat’s Got Sass (Patronize) followed at $7 by Hoi An & Storm Whisper (Snippetson), $7.75 Spin The Knife (Snippetson), $8.25 Policiere (Safeguard) and $9 He’s Gold. 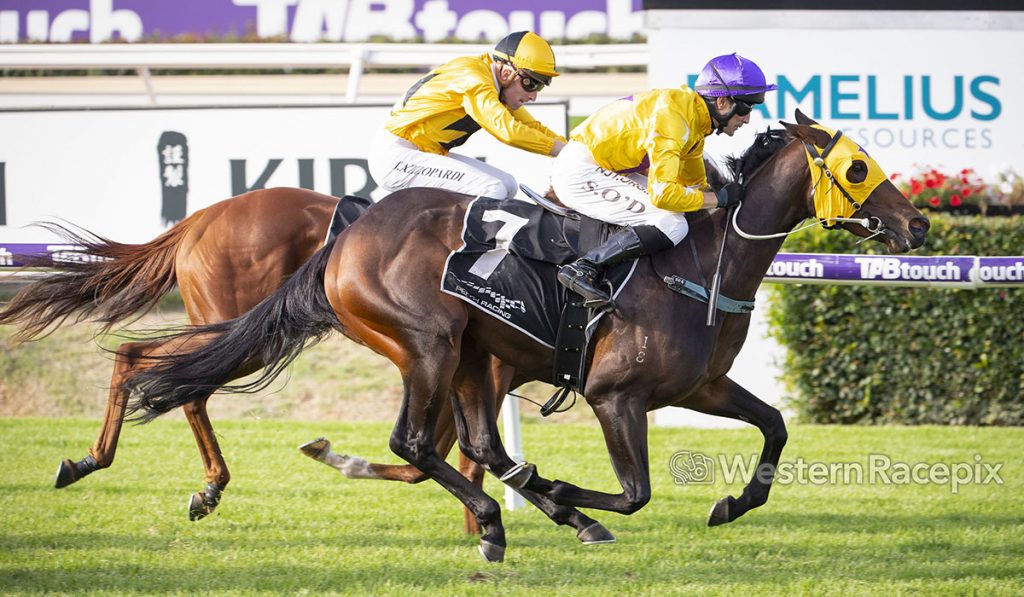