War Chant (USA) capped another successful week with a double courtesy of front-runners Ladies Of London (Bunbury) on Saturday and Bombardment (Ascot) on Sunday.

The Yarradale Stud sire had warmed up with Neville Parnham’s promising 2yo trial winner War Gem (Belmont) on Tuesday and he followed up with Warcidium (Pinjarra) on Wednesday and Strathmore Rose (Albany) on Thursday.

Ladies Of London is an honest campaigner winning 4 of her last 8 starts for owner Tony Patrizi and trainer Lindsey Smith.  She controlled the South-West Reality Hcp (1200m) under Joey Azzopardi before clearing out to a three-length victory in front of a big Bunbury Cup crowd.

“She’s going super and is a lovely mare,” stable rep Donna Riordan said.  “Lindsey knows her so well and she generally runs a good race with a break between runs.”

Patrizi bought her for $80,000 from Dawson Stud at the 2017 Perth Magic Millions.  Her dam Movie Queen (Bletchley Park) has also thrown Ascot 2yo winner Miss Ellmya (Alfred Nobel) and trainer Rhys Radford has her unnamed 2yo colt by War Chant.

Bombardment got away with some cheap sectionals to land the TABtouch-Better Your Bet Hcp (1800m) on Sunday.  He was a cheap $17,000 buy for Neville Parnham from Dawson Stud at the 2016 Perth Magic Millions.

Parnham trains the gelding for his wife Carol and Perth Racing Director Paula Sullivan who was celebrating a ‘milestone’ birthday.  “He was always going to be hard to run down when they didn’t tackle him for the lead,” Parnham explained.  “Chris (Parnham) rated him well and he had plenty left in the straight.

“There are no big plans for ‘Bombie’.  He’s won twice this campaign and we will keep chipping away.  He’s doing a good job and can keep winning if things go right in his races.”

Bombardment’s dam Catzeel (Catbird) is a full-sister to Dawson Stud’s top-class stayer Cat’s Fun who won a G1 WA Derby and G2 Perth Cup.  She has a yearling colt by Snippetson and was covered by Long Leaf in October.

War Chant finished third for turnover during Book 1 of the Perth Magic Millions last month with 11 yearlings changing hands at a 100% clearance rate.  Top price of $100,000 was paid by Santo Guagliardo for the colt from City Magic who is bred on the same Bletchley Park cross as Ladies of London. 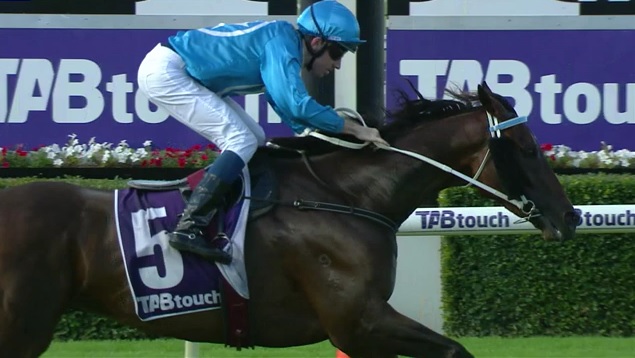