Maschino mare Fabergino will be the catalyst for an increased interstate presence for Perth trainer Tiarnna Robertson.

Following Fabergino’s successful defence of the LR Bob Hoysted Stakes (1000m) at Flemington on the weekend, Robertson revealed she will be expanding her team in Melbourne.  “I’ve outstayed my visitor’s licence at Mornington,” Robertson told The West Australian.  “I was at Jason Warren’s stable for five months and they’re happy with me taking up a few more boxes.

“I’ve got a couple of horses heading over from Perth.  There’s not another Fabergino amongst them but there are plenty of opportunities at lower levels over here.”

Fabergino (6m Maschino – Miss Razyana by Danzero) has now won four times in five outings down the famous Flemington straight with her only blemish coming in the G1 Lightning Stakes when she was a brave fourth behind champion sprinter Nature Strip.

“We gave consideration to taking her to Sydney but she loves it here and she got in with 59.5kg after Hey Doc compressed the weights,” Roberson added.  “She’s rock hard fit and the weather was on our side.

“And there was no reason not to back her up from a two-week break off the Lightning.”

The grey flyer is the flag-bearer for Maschino but the Alwyn Park resident isn’t a one-trick stallion.  He’s among the leading WA sires for prizemoney-per-runner this season ($36,788) behind front-runner I’m All The Talk ($48,689).

Maschino sprinter-miler Scooter’s Machine has won his last two at Pinjarra and Ascot for Collie trainer Chris Gilbert and he has been nominated for the William Barrett Vase (1200m) at Bunbury this Sunday.

Scooter’s Machine was bred by Graham Yuill from Calaway Darl (Shamardal) who was sourced from a Patinack Farm Dispersal by Michael Flannery (as agent) in 2013.  She is an unraced half-sister to G1 Golden Slipper Stakes winner Calaway Gal and her latest foal is a yearling colt by Maschino. 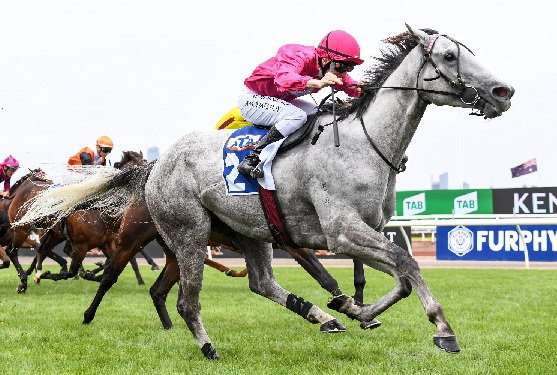