Home Making winners by the Man

Making winners by the Man

Yarradale Stud is coming off another successful week led by its in-form sire Gingerbread Man.

The Group 1 winning son of Shamardal is averaging more than a win a week since the start of the year to reinforce his position as a Top 10 stallion in WA.  His Melbourne-based sprinter Ginger Jones won at Mornington last Saturday and he was followed by Ain’t No Other Man (Ascot) on Wednesday and Tommy Blue (Pinjarra) on Thursday.

Tommy Blue was a bargain buy for Wes and Sheree Martin at the 2018 Perth Magic Millions.  She cost just $20,000 from Mogumber Park and Thursday’s all-the-way victory sent her earnings to $171,125 which includes Westspeed Bonuses of $43,500.

The Martins can also count on her rising residual value as a black-type member of the Born Rich family with a placing in the RL Magic Millions 3yo Trophy last year.

Gingerbread Man received strong support from the Yarradale roster and its outsourced stallion Vital Equine (Ire) who stands at Roselee Park.  His fifth stakes winner arrived last Sunday when Bella’s Idol made the most of an ideal trip to land the LR South West Autumn Cup (2219m) at Bunbury.

Bella’s Idol is a homebred for Mark Fortune and is the first foal of Bella Contessa (Bel Esprit).  She has a yearling colt by Vital Equine and Roselee Park’s Tracy Rodwell bred her back to Jimmy Choux (NZ) last year.

Bradbury’s Luck 3yo Kazoku looks a capable and progressive type in the early stages of what could be a productive career.  The grey filly was a Pinjarra runner-up on debut just last month and went one better in the Mandurah Stockfeeds Maiden (1413m) back there on Thursday.

Kazoku was given the run of the race by Clint Johnston-Porter and responded with a determined finish to score by over a length.  She was part of the Yarradale consignment to the 2019 Perth Magic Millions and owner Ron Sayers stayed in after John Smith parted with $30,000 at the Swan Valley.

Her page has produced over a dozen stakes winners for the Aga Khan under second-dam Darazina (Fr) including Almanzor (Wootton Bassett) who was Champion 3YO Colt in Europe in 2016.

Kazoku’s dam Zaldivar (Honour And Glory) is a half-sister to South African Group 2 winner Honorine (Redoute’s Choice).  Dan Morton is training her final foal.  She’s an unnamed 2yo filly by War Chant (USA) who doubled up at the Lark Hill trials on Monday with Warbler and Gifted Warrior.

Warbler was eager to go faster in a 950m hit-out and swooped when Shaun McGruddy said ‘Go’.  He had barrier problems early on and was then backed and beaten twice as a short-priced favourite at Belmont in September 2019.

A stable transfer saw him win first-up for Stephen Miller during last year’s winter season at Belmont.  Warbler was bred by Vern Brockman and Sayers from Graceful Tune (Key Business) who is an unraced sister to Ascot stakes winners Keyton Grace and Shock Value.

Gifted Warrior has been a bit of a rogue at the barriers after a commencing his career with wins at Northam and Ascot.  The War Chant gelding was suspended by stewards, not for the first time, on Australia Day after being left at the post at Bunbury.

New trainer Dion Luciani and jockey Jade Mc Naught have been tasked with getting the best out of Gifted Warrior.  It was his third trial this month and, after jumping on terms and sitting three-wide, he knuckled down in the straight to hold out Touch Of Silver.

Excelestial notched another win for the Yarradale brand in the Amelia Park Lodge Hcp (1200m) at Ascot on Wednesday.  It was her third in town for trainer Hec McLaren and Yarradale’s graduation class of 2018.

Excelestial (4m Excelebration – Yardi Yardi by Snippetson) was a $20,000 buy for McLaren at the 2018 Yarradale Stud Yearling Sale.  Her dam was owned by Bert Viera and had transferred west carrying the Ascot winner after changing hands for $25,000 at the 2016 Inglis Easter Broodmare Sale. 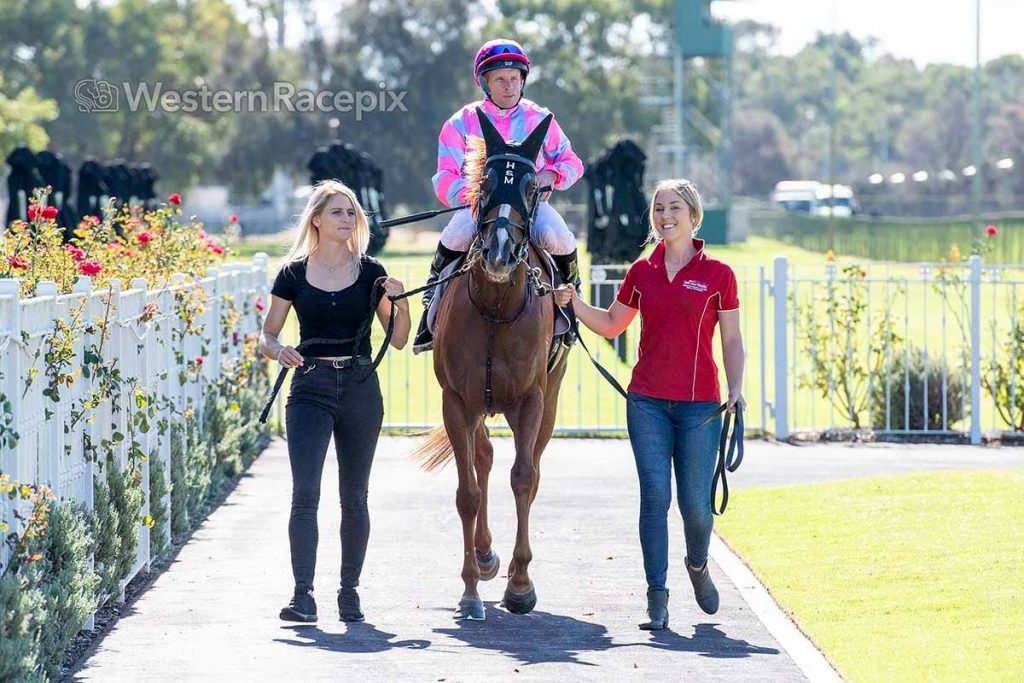