Gold Front stallion Awesome Rock was represented by his first winner when Kaymay scored remarkable victory at Ascot on Saturday.

Kaymay appeared a forlorn chance when spotting the leaders a half-dozen lengths well into the straight but she sprouted wings from the furlong pole to nail Queen’s Gift right on the line in the Bunuru Plate (1000m).  Her debut followed a soft trial win at Belmont on March 15.

Winning rider Kyra Yuill, who was standing in for the suspended Jade McNaught, was very impressed with her finishing burst.  “I was a lucky to pick up the ride and this filly is a professional which makes it easier.  She wasn’t hit with the stick in her trial and when I gave her one today she kept finding.  It was a tough win and she will like a longer trip than today.”

Gold Front owners Alan and Sue Olive bred Awesome Rock and they kept a share and stallion rights after his sale to trainer Leon Corstens for $575,000 at the 2013 Gold Coast Magic Millions.

Awesome Rock (Fastnet Rock) was a Group 1 winner of the 2016 Emirates Stakes (2000m) at Flemington.  His first crop will build on Saturday’s breakthrough and will come into their own when getting up to a mile in races like the G2 WA Guineas at the next Ascot summer carnival. 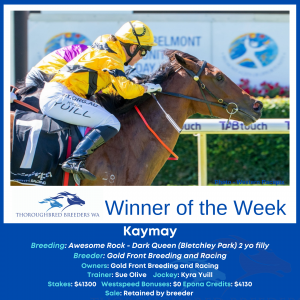