There’s no stopping WA Wizard Willie Pike in Victoria and there was no way he was going to lose the $125,000 Peninsula News Hcp (1200m) aboard Ginger Jones on Saturday.

The Gingerbread Man sprinter was the first of four winners for Pike at the stand-alone Mornington Cup meeting following his daredevil ride to land the G1 William Reid Stakes on Masked Crusader at Moonee Valley on Friday night.

Pike (Ginger Jones) and Music Addition (Craig Newitt) broke away from the field and were five lengths clear approaching the home turn.  The wind factor had favoured horses with cover earlier in the day but Pike threw caution to the wind and went for home coming off the corner.

Ginger Jones revelled in the conditions to race away and claim his 6th win in 22 starts for prizemoney of $309,490.  “I let Willie use his judgement tactics-wise and that turned out to be a very good decision,” trainer Andrew Noblet admitted.  “He won really well first-up at Caulfield but everything went pear-shaped when we took him to Adelaide last month.

“He’s comes back nicely today for an all-Western Australian win.  Hopefully, we can keep the team together.”

The Mornington win was the fourth anniversary of the 2017 William Reid Stakes won by his older half-sister Silent Sedition (War Chant) who was also trained by Noblet for Curnow.  She was subsequently sold to Katsumi Yoshida for $1.50 million and her first two foals are a colt and filly by Snitzel.

Gingerbread Man (Shamardal) has sired 8 stakes performers and among them is Melbourne-based sprinter-miler Coming Around who won the Ballarat Gold Nugget during a spring prep for Sutton Grange trainer Brett Stanley.

His 3yo filly Okay To Pay also carries Curnow’s black and green colours and she looks a nice prospect off a winning debut earlier this month at Cranbourne. 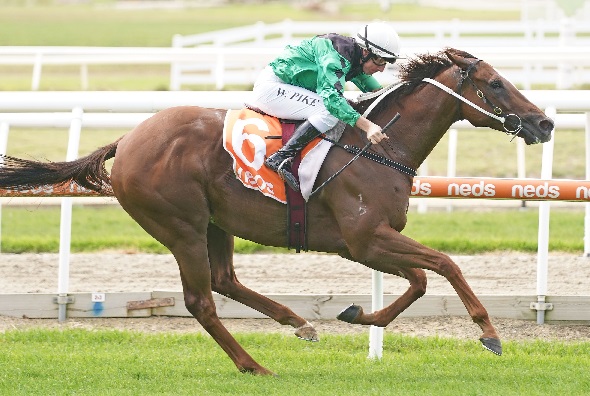