Mt Hallowell Stud homebred Hoi An can kick-start a rewarding week for Craig and Rose Thompson in the G2 Karrakatta Plate (1200m) at Ascot on Saturday.

Perth’s premier juvenile race is shaping up as one of the most open in recent years.  Hoi An won the G3 Gimcrack Stakes (1100m) a fortnight ago for trainer Roy Rogers and she is one of seven youngsters in single-figures for the Karrakatta behind $4.20 favourite Pat’s Got Sass.

The focus will then switch to the Inglis Easter Yearling Sale on Tuesday when Mt Hallowell’s American Pharoah – Top Girl colt is offered (as agent) by Middlebrook Valley Lodge.

The Thompsons won their first Karrakatta with Luke’s Luck (Show A Heart) in 2012.  He jumped from a wide gate but Hoi An fared even worse when given 17 at this year’s barrier draw on Tuesday.

“It will be a challenge from out there but Hoi An ran the fastest last 600m,400m and 200m sectionals in the Gimcrack despite the fact she was held up and needed to weave her way through traffic on the fence,” Thompson said.  “She may very well be something special and is bred to run a strong mile so she will be finishing hard down the outside.”

Rose also has a back-up with $51 outsider Six Carat.  She is part of a Ladies Syndicate that races the Demerit filly with trainer Paul Jordan and his wife Laura.

Hoi An is one of just a half-dozen foals by ill-fated sire Longma and her dam M’lady Hallowell (Wanted) is from a half-sister to USA Group 1 winner Spinning Round (Dixieland Band).

Longma (Sebring) was bred in the purple being a three-quarter brother to Gimmethegreenlight (G1 Queen’s Plate) and a half-brother to Ofcourseican (G1 Coolmore Classic).  He won a Werribee nursery by 8 lengths for trainer Mick Price before transferring to Gai Waterhourse where he won at Warwick Farm and was runner-up in the LR Daybreak Lover Stakes at Eagle Farm.

“He was one of my favourites and was going to be anything after Werribee,” Thompson recalled recently.  “I got offered $1.40 million from Hong Kong but knocked it back.”

Longma retired to Mt Hallowell in 2016 but his stud career was cruelly cut short when he died following foot surgery.  His only other starter besides Hoi An has been Belmont winner Zadok.

That’s been one of the few setbacks since Mt Hallowell was established in 2005 at Denmark on the southern tip of Western Australia.  “My grandpa had a dairy farm down here and as kids we caught rabbits, milked cows and learned to swim in the Hay River,” Thompson recalled.  “It’s a sanctuary for me.”

A love of horse-racing began as a nipper when backing a longshot winner at Narrogin and he could afford to get serious after building his Fremantle shipping agency Seacorp into a multi-million dollar business.

Thompsons’s first good one was Theseo.  He bought a share in a syndicate with Waterhouse and the iron-horse raced on year after year winning 11 races and earning over $3.23 million in prizemoney. Craig also raced Brave Smash in partnership to win a G1 Manikato Stakes at Moonee Valley.

Santos (I Am Invincible) will have his first yearlings for sale at the 2022 majors and Thompson has a cracking colt by Coolmore Stud shuttler American Pharoah (USA) catalogued as Lot 132 for the Inglis Easter Sale next week.

“He’s more forward than most of the American Pharaohs and ticks all the boxes,” Middlebrook’s Verna Metcalfe reported after the first day of inspections at Riverside Stables.  “He’s beautifully balanced and parades like a real athlete.” 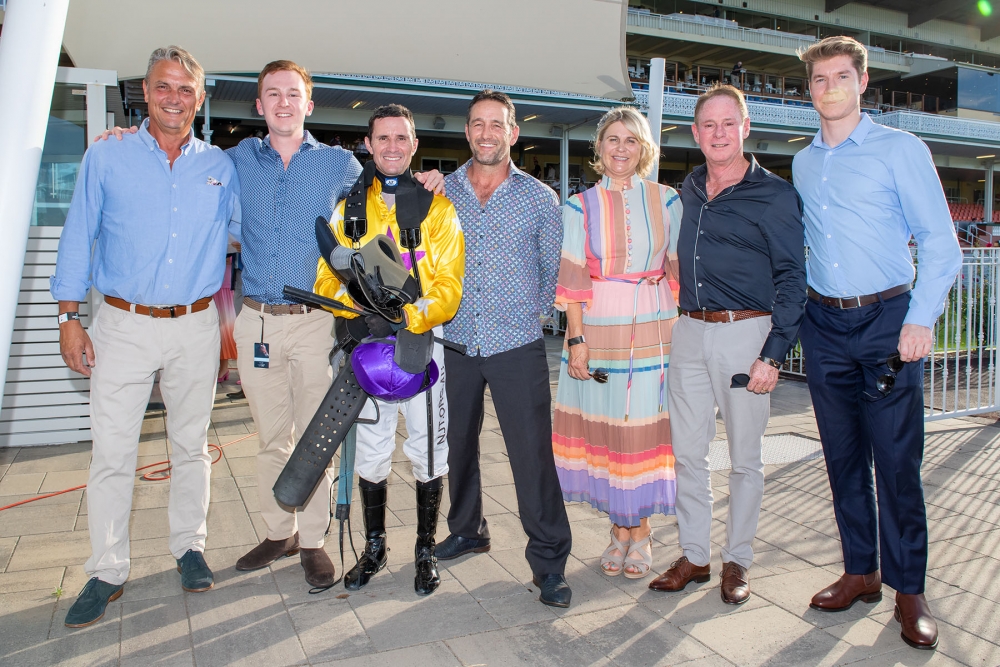