Born Spicy returned from a long spell earlier this month and she’s ready to go to the next level after winning second-up for trainers Ben and Dan Pearce on Sunday.

The grey filly opened the inaugural Pinjarra Scarpside meeting with a go-to-whoa victory in the Rowdycool Air Maiden (1000m).  Ridden by Joe Azzopardi, the filly was well-commissioned from $5 into $3.30 and showed good early dash for a determined long-neck victory over $1.60 favourite Nowhiteflag (Maschino).

Born Spicy (3f Gingerbread Man – Born Priceless by Pricelessly) put the writing on the wall with a solid third behind talented types Just A Pinch and Billy Ray at Ascot on April 14.

She had flashed potential during a juvenile campaign on soft tracks at Belmont in June-July.  An impressive fourth on debut behind subsequent black-type fillies Magical Dream and Snickerdoodledandy after being caught wide was followed by a close third to Melbourne-bound filly Continuance after enduring another tough run.

Born Spicy is a Yarradale Stud homebred and, being the last foal of a G2 Karrakatta Plate winner, was never going to be offered for sale.

Born Priceless was pensioned in 2018 and Born Spicy was her first filly in a decade.  Yarradale owner Ron Sayers also breeds from her older daughters Born Princess (Elusive Quality) and Deemed Priceless (Anabaa) although neither was covered last year.

Born Princess has Gingerbread Man 3yo filly Okay To Pay showing ability for trainer Phillip Stokes in Victoria.  She won a Cranbourne maiden in March and doubled up at Bendigo on April 6 before being eased down at Caulfield on Saturday.  Okay To Pay began awkwardly and a post‑race vet examination revealed a mouth laceration.  Stokes advised the filly would now be spelled.

Yarradale stallion Gingerbread Man (Shamardal) has sired 8 individual winners in the last month and his last-start Ascot winner Just A Pinch was the TBWA Winner of the Week on April 19. 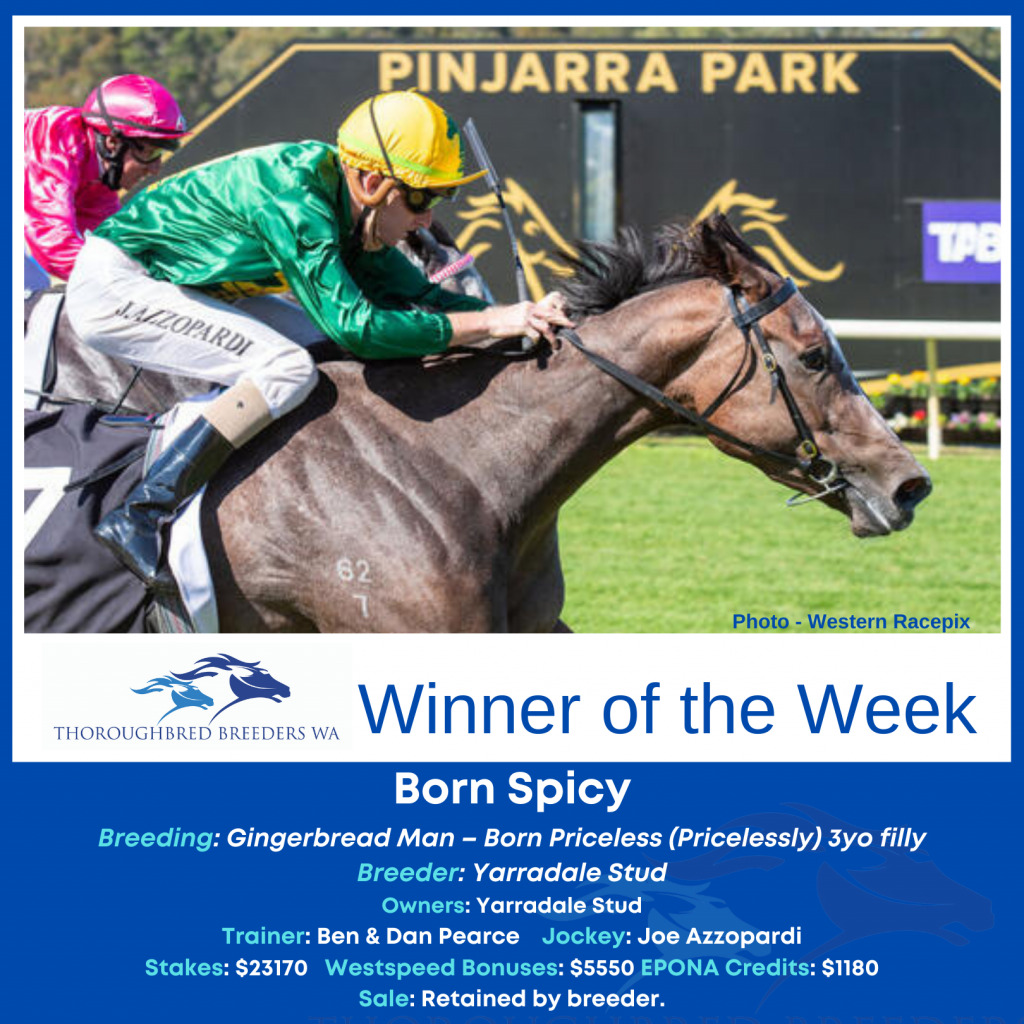 Winner Of The Week – Born Spicy