Top 2yo Ex Sport Man headlined another successful autumn at Ascot for Playing God and the Darling View champion can keep the momentum going this Saturday.

Playing God was on target with Fiery Water and Bruce Almighty last Saturday and he’s multi-tasked with six starters for the final meeting of the season at Ascot.  Among them are strong winning chances like Playing Red (R1), Bruce Almighty (R4), Divine Pair (R5) and Nerodio (R9).

Fiery Water’s win last week was a relief for trainer Adam Durrant after a mystifying failure in the Westspeed Platinum Final.  “He might have choked down but the scope came back clean.  He’s a good eater and we want him to be a stayer but he just won’t chill out.”

Bruce Almighty comes off a seven-day back-up in the Hall Of Fame Inductees Hcp (1600m) on Saturday.  He dived right on the line to collar Billy Ain’t Silly (I’m All the Talk) last Saturday and can win again with 56kg.  “He’s been ultra-consistent and is really starting to hit his straps,” trainer Neville Parnham confirmed.  “He’s not the sort of horse that can carry weight so we’ve had to pick and choose his races.”

Bruce Almighty is the final named foal of G3 SA Sires’ Produce Stakes winner Isanami (Tayasu Tsuyoshi) and he’s been a consistent money-spinner for an Oz Racing syndicate banking $193,040 including Westspeed bonuses of $10,500.

Kay Cee could be instrumental in the battle for WA Leading Active Sire honours this season.  Snippetson ($2.75m) currently leads that ladder but Playing God ($2.58m) can make inroads before racing returns to Belmont on May 22.

Blackfriars has the WA premiership all sewn up for the 11th season in a row.  Arion figures on May 13 showed the deceased Scenic Lodge legend had earnings of $3.30 million. 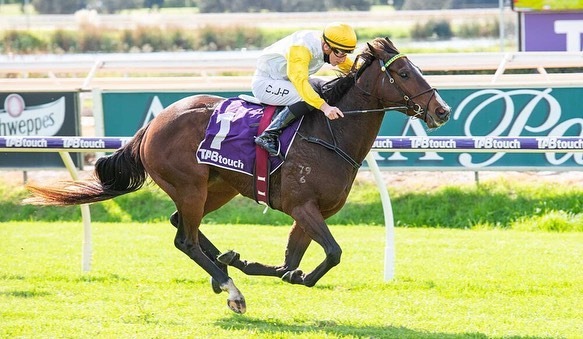