Not To Be Mist didn’t settle for Willie Pike in the race won by Creator on April 24 and trainer Adam Durrant believed the quick turnaround would take the edge off him at Ascot.

That’s how it worked out for Clint Johnson-Porter who had been aboard in the gelding’s previous four starts this time in.  They settled three back off a hot speed before making a move in the straight to defeat G2 WA Guineas winner Watch Me Dance.

Not To Be Mist is an Oakland Park homebred by former Mungrup Stud stallion Danehill Express and he’s a three-quarter brother to Express Service (Magic Millions Perth 3YO Classic).

His dam Misty Donna (Marooned) was subsequently sold to NSW breeder Ann Taylor and she has foaled colts by Spendthrift Australia stallions Jimmy Creed (USA) and Swear from her last two covers.

Oakland Park just missed a running double in feature races with Ripper Rita in Adelaide on Saturday.  The WA-bred Street Boss filly was beaten less than a length when placed in the G1 Australasian Oaks after a last-start victory in the VOBIS Sires Guineas at Caulfield.

Unbeaten filly Timely Outburst was a very impressive first-up winner for Oakland Park sire Sessions at Ascot on Wednesday.  She loomed up to front runner Rock The Planet in the straight and put him away by two lengths.

Timely Outburst (3f Sessions – Carryon Regardless by Mosayter) was bred by Bellbridge Park’s Siobhan Campbell and is the first foal of a two-time Belmont winner whose family traces back to top-class racemare and producer Stage Hit (Century). 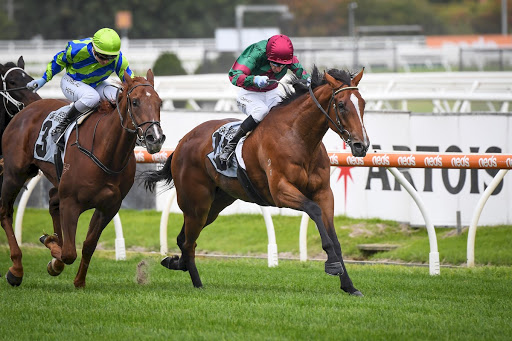