The other buy heading to Vasse is an American Pharoah colt out of Angharad (Lot 265) that cost $105,000.  His dam is a juvenile winning Exceed And Excel half-sister to G3 Gloaming Stakes winner Sweynesse.

Ascot trainer Luke Fernie bought a half-dozen lots on behalf of owner Kim Doak for a total spend of $232,000.  The colts are by Written By, Flying Artie, Deep Field, Pariah and Russian Revolution while the sole filly is by Epaulette.

Bridge Patrol Lodge trainer David Harrison went back to a proven source when weighing in with $70,000 for a filly by Russian Revolution (Lot 114).  She is a half-sister to Harrison’s Magic Millions 2YO Classic winner Jericho Missile.

Miller paid $80,000 for Ocean Jewel as a foal in 2015 and, after winning a LR Placid Ark Stakes, she was sold by owner Mark Chadwick as a broodmare prospect for $1 million.  Her colt by I Am Invincible had the Gold Coast arena buzzing on Day 1 when topping this year’s Foal Sale at $1 million.

Another former Perth mare topped Day 2 when the I Am Invincible – Ellicazoom colt sold for $625,000 to Aquis Farm owner Tony Fung.  Catalogued as Lot 339, he’s the first foal out of LR Burgess Queen Stakes winner Ellicazoom who went on to claim a G3 Cockram Stakes in Melbourne.

Kitchwin Hills manager Mick Malone paid $420,000 for Ellicazoom (Testa Rossa) at the 2018 Magic Millions Perth Winter Mixed Sale.  “He’s such a lovely, lovely colt,” Malone said.  “He had this amazing presence from the day he was born.  He really just stood out on the farm.  Ellicazoom is a beautiful mare and she’s in foal to Exceed And Excel.”

Perth owner Santo Guagliardo had originally paid $180,000 for Ellicazoom when she was offered as a yearling by Attunga Stud at the 2015 Gold Coast Magic Millions.  Her dam Ellicorsam (Fimiston) was a Group 2 winner of a Winterbottom Stakes and Lee-Steere Stakes in Perth before transferring east for a Group 1 victory in the Swettenham Stud Stakes in Adelaide.

The Magic Millions National Series continues on Tuesday, May 25 with Day 1 of the Broodmare Sale. 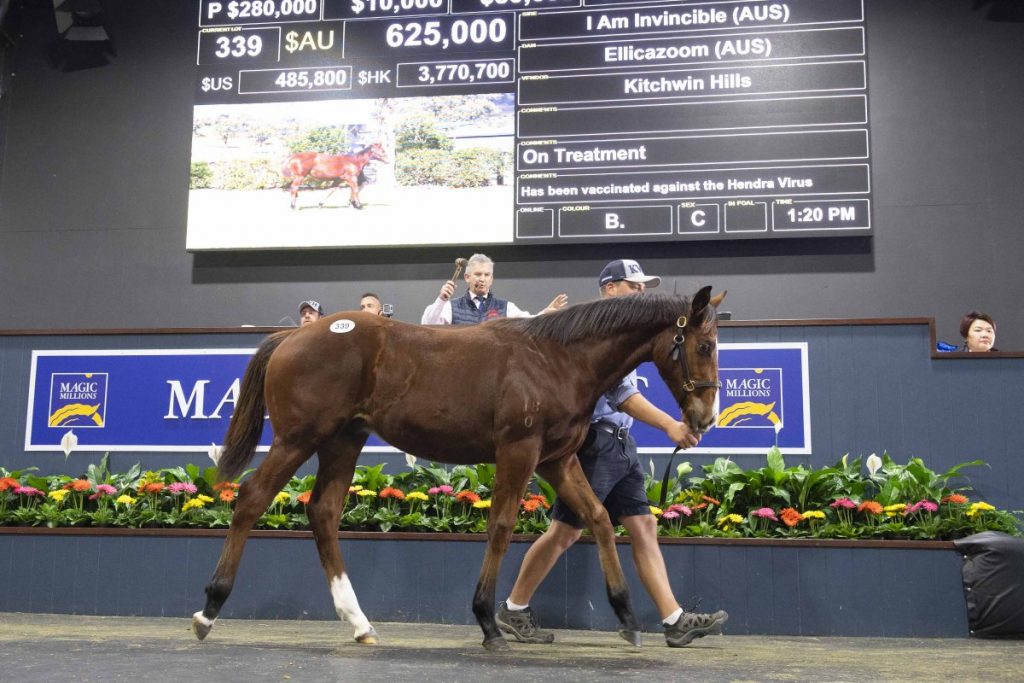 I AM INVINCIBLE – ELLICAZOOM COLT