Scenic Lodge resident Snippetson sired his fifth juvenile winner of the season on Wednesday when Forever Dreaming showed her true colours in the Amelia Park Hcp (1200m) at Belmont.

The Colin Webster-trained filly ranged up to the Star Turn youngsters Beads and Vranyo at the furlong and put them away to score by a length.  It made amends for a disappointing debut behind Flying Missile last month.

Forever Dreaming (2f Snippetson – Absolute Cracker by Flying Pegasus) was a $24,000 buy from Scenic Lodge (as agent for breeder Glenn Martin) at the 2020 Perth Magic Millions.  She races for a syndicate that includes Webster and his wife Lynne, Martin and the Luzi family.

“I couldn’t believe she ran so poorly first-up,” Webster admitted.  “Her trials had been excellent so it could have been just stage-fright.  She pulled up okay and I thought she would win today.

“She missed the kick slightly but I was happy with the way she travelled and she’s certainly going to get further.  I think she can be a Champion Fillies type next season.”

Forever Dreaming is the final foal of Belmont 2yo winner Absolute Cracker.  Second-dam Arabella (Belele) was a Group 3 winner of the 1994 WATC Sires’ Produce Stakes.

Forever Dreaming was the second-leg of a winning double for Scenic Lodge and Martin on Wednesday following How’s The Serenity in the Dream Horse Hcp (1200m).  They sold the Magnus filly for $40,000 to Simon Miller at the 2019 Perth Magic Millions.

How’s The Serenity’s dam Sweet Serenity (Pearl Of Love) won four times in Perth and she also earned black-type with a Listed placing in the 2011 Jungle Mist Classic.

Scenic Lodge stands Snippetson and Universal Ruler for $8,250 this season alongside Dash For Cash ($2,200).  All fees (inc GST). 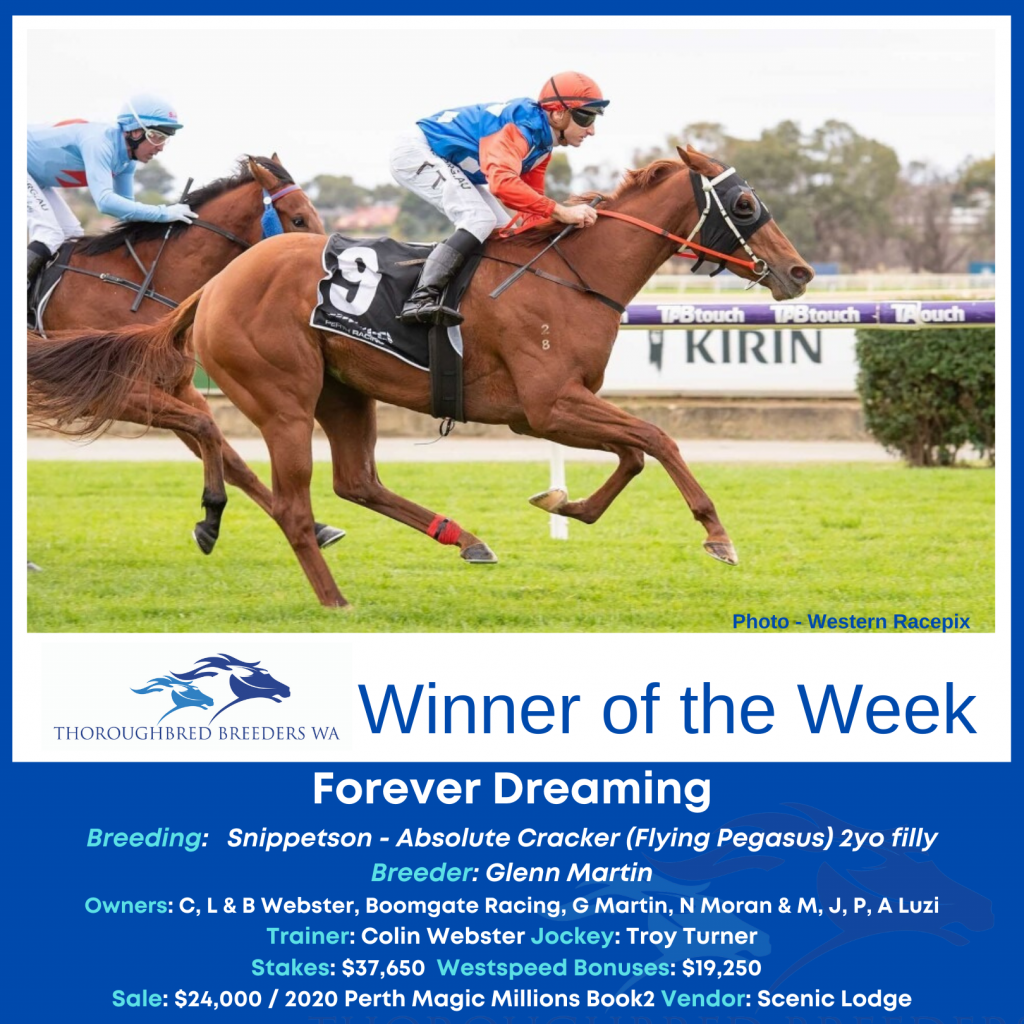 Forever Dreaming – Winner of the Week