Baronova – TBWA Winner of the Week

Progressive filly Baronova is going through the grades like a good stayer in the making for Lynward Park Stud.

The Justin Warwick-trained 3yo won at Northam and Pinjarra before completing a hat-trick in the Mrs Mac’s Hcp (2200m) at Belmont last Wednesday.  She did it easily and will be hard to beat again in the LR Belmont Oaks (2000m) this Saturday.

Lynward Park won the 2017 Belmont Oaks with Fontainebleau (Alfred Nobel).  She later claimed a LR Starstruck Classic at Ascot before retiring to Bullsbrook where her first foal is a colt by Bondi.

“Baranova has only ever got better and is bred to do exactly what she’s doing,” Warwick said after the filly accounted for a stablemate Juliette (NZ).  “She struggled in shorter races but gets into a rhythm and relaxes now that she’s getting over ground.”

Nevertheless, Lynward Park’s van Heemst family could be looking for a new trainer after Warwick indicated he will be having some time off in the months ahead.  The Myalup trainer dispersed 15 gallopers at the Magic Millions Winter Sale on Sunday.

Baronova is a daughter of G1 Melbourne Cup winner Fiorente (Ire) and is a half-sister to I’m Feeling Lucky (G3 La Trice Classic) and Utgard Loki (Eurythmic Stakes).  Their dam Twinkle Toes has a yearling colt named American Songbook (Manhattan Rain) and a filly foal by More Than Ready (USA).

Twinkle Toes (Ire) was bred by Coolmore Stud and is a daughter of Danehill from a half-sister to leading sires Dr Devious, Archway and Shinko King. 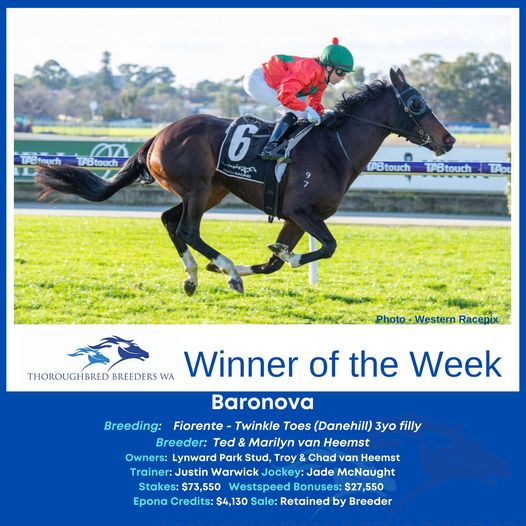