Ohbeeh is the third TBWA Maiden of the Week by Sessions this month and it’s a timely vote of confidence in the Jim Taylor-trained gelding who reserves his best for Belmont.

He joins Sessions fillies Sockoff and Timely Outburst after a front-running victory first-up in the TABtouch-Westspeed Platinum Hcp (1200m) on Saturday.  Given a trouble-free run by Laqdar Ramoly as the $3.20 favourite, he accelerated on a Soft 6 surface to score by over a length from Snippy Miss (Snippetson).

“He’s had feet issues and appreciates the sting out of the ground,” Taylor revealed.  “We kept him ticking over at home during the last month of the Ascot season when the track was getting rough.  He only had the one trial which he won in the fastest time of the morning and was fit enough today.

Ohbeeh (4g Sessions – Can Time by Danetime) had a won a Bunbury 3yo maiden in January 2020 and broke through in town at the end of the season on a Soft 5 at Belmont.  The latest victory send his bank balance to $74,760 which includes $14,350 in Westspeed bonuses.

He was bred by Don Summers who raced his dam Can Time to wins at Belmont (2) and Pinjarra (2).  He also bred 1997 G1 Railway Stakes winner Willoughby (Fimiston) from the same family.

Sessions (Lonhro) sired 9 individual winners in May and Ohbeeh was the first leg of winning double on Saturday.  The Oakland Park stallion doubled up 40 minutes later with Comes A Time in the Amelia Park Lodge Hcp (1000m).

A Group 2 winner of The Shorts in Sydney, Sessions has a 64% winning strike-rate this season and he will stand for an $8,800 service fee at Oakland Park this season alongside King’s Troop (Redoute’s Choice) who is priced at $4,400. 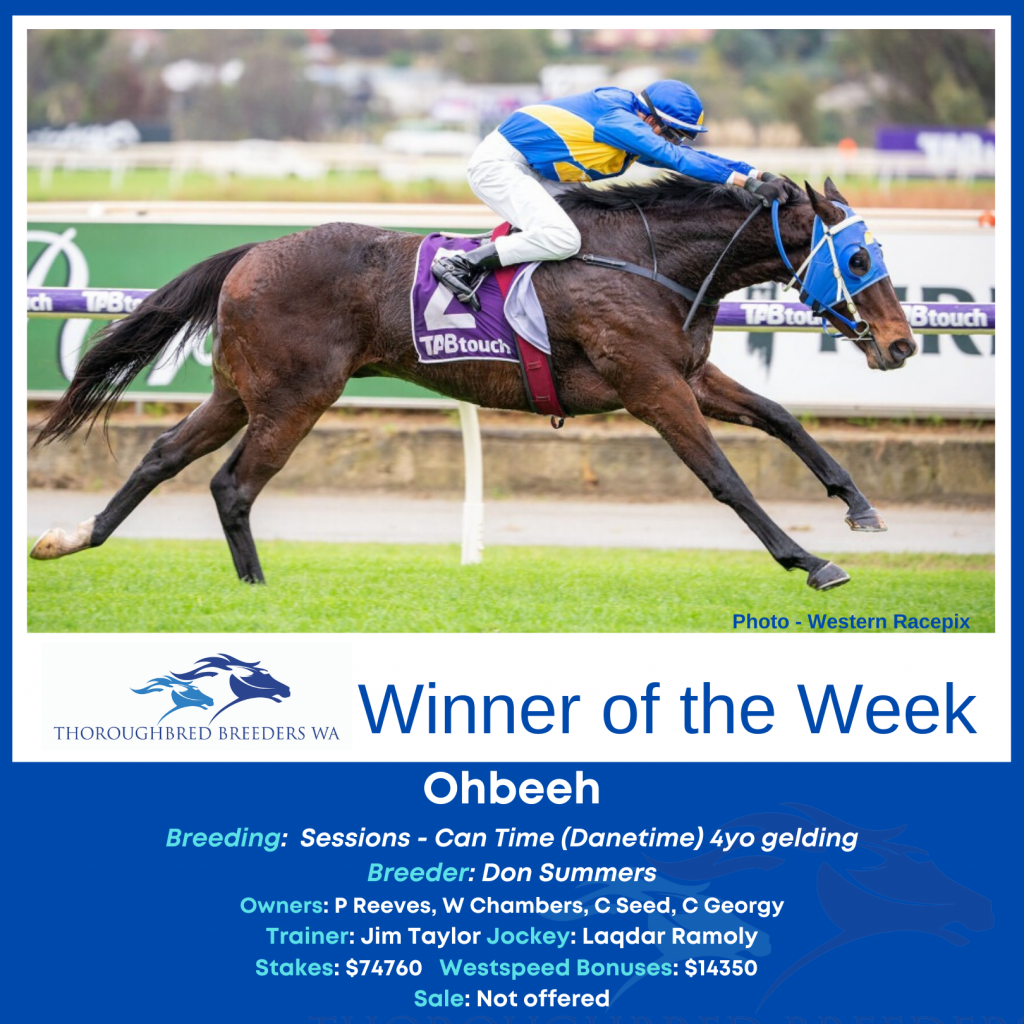 Ohbeeh – TBWA Winner of the Week