The Westspeed EPONA initiative and its rewards headline the 2021 Stallions Magazine.   EPONA provides 10% of winning prizemoney to be accumulated as a line of credit for mare owners to use with any Westspeed Platinum sire when they go to stud.

The online edition can be viewed here   The printed edition will be distributed next week.

Rocky Path claimed her third instalment of Westspeed EPONA credits winning the Amelia Park Lodge Hcp (1200m) on Wednesday.  EPONA credits have been back-ended to August 2019 and Rocky Path had already earned $5,052 for wins at Belmont and Kalgoorlie.

Rocky Path (Therock) stormed down the centre of the track first-up to overhaul Our Pandemonium (Oratorio) and Sea War (War Chant) at Belmont.  “I knew if she hit her straps she would win but she did come here a run underdone,” trainer Vaughn Sigley said.  “All credit to Kristy (Bennett) who has an affinity with our horses.  She listens and carries out instructions to the letter.”

Sigley expects Rocky Path to have a better prep after a run of outs last time in.  “We can only put that down to an accident at home when she jumped a fence during a lightning storm.  The chiropractor worked on her and she has come back much stronger and happier.”

The 4yo mare is part-owned and trained by Sigley and he prepares her for a syndicate that includes well-known greyhound identities like Nambeelup trainer Chris Halse and leading owners Andrew and Peter Haines.

Former Waterford Stud resident Therock (Fastnet Rock) sired her from Xaartos (Xaar) who is now based at Geisel Park where she has a filly foal by All American. 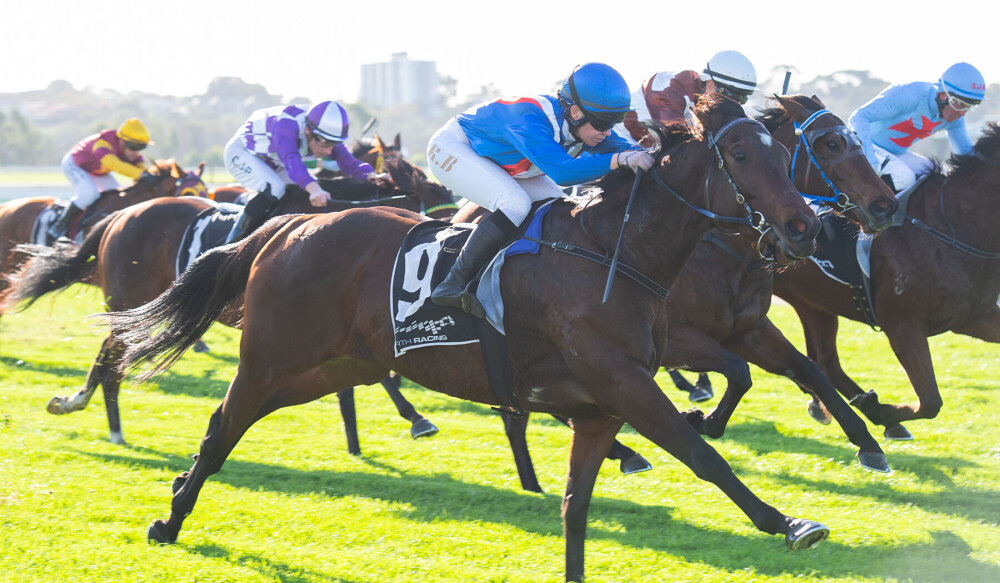