Geisel Park landed a city-winning double when Double Rush and Rocky Path were successful at Belmont on Wednesday.

Double Rush is by resident sire All American while Rocky Path was a Geisel Park graduate from the 2017 Perth Magic Millions Winter Weanling Sale.

Distinct Racing owner Geoff Evans bred Double Rush by using All American over G2 Karrakatta Plate winner No Questions (Xaar).  He lobbed in a Kalgoorlie maiden last month and made the grade in town with an on-pace victory in the TABtouch Better Your Bet Plate (1000m).

“We sent him up to Peter Fernie to boost his confidence in the Goldfields and it worked,” Pearce Racing’s Dan Pearce said.  “He came back home last week and was due to go out for a break but was in such good order we decided to go around again.

“It was pleasant surprise at those odds ($41).  He’s in great nick and isn’t showing any signs of wanting a spell.”

No Questions was covered by All American again last September.  Apart from the 2005 Karrakatta, she was a Group 3 winner of the 2007 Roma Cup and Hyperion Stakes for Evans and trainer Trevor Andrews.

Rocky Path (Therock) was a giveaway when trainer Vaughn Sigley and his partner Emily Quartermaine bought her as a foal from Geisel Stud for $500.  She was a first-up winner of the Amelia Park Lodge Hcp (1200m) on Wednesday and has now earned $136,476 and EPONA credits valued at $6,522 towards a service fee when she retires to stud.

Quartermaine reports she won’t be going to stud for at least another season.

Rocky Path’s dam Xaartos (Xaar) has been catalogued as Lot 82 for the Perth Magic Millions Winter Sale on Sunday, June 27.  She is a half-sister to All Friared Up (LR Beaufine Stakes) and is due to deliver her third All American foal in a row in September.

Sigley and Quartermaine also stand Scenic stallion Due Sasso.  An injury sidelined the former Mungrup Stud sire from serving last year but he’s back as good as gold for this season.

The Hopeland couple have a Due Sasso yearling colt from Alfreda (Alfred Nobel) who was bred by Arthur Mortimer.  She’s closely-related to Mortimer’s G2 Lee-Steere Stakes winner Tribula (Tribu). 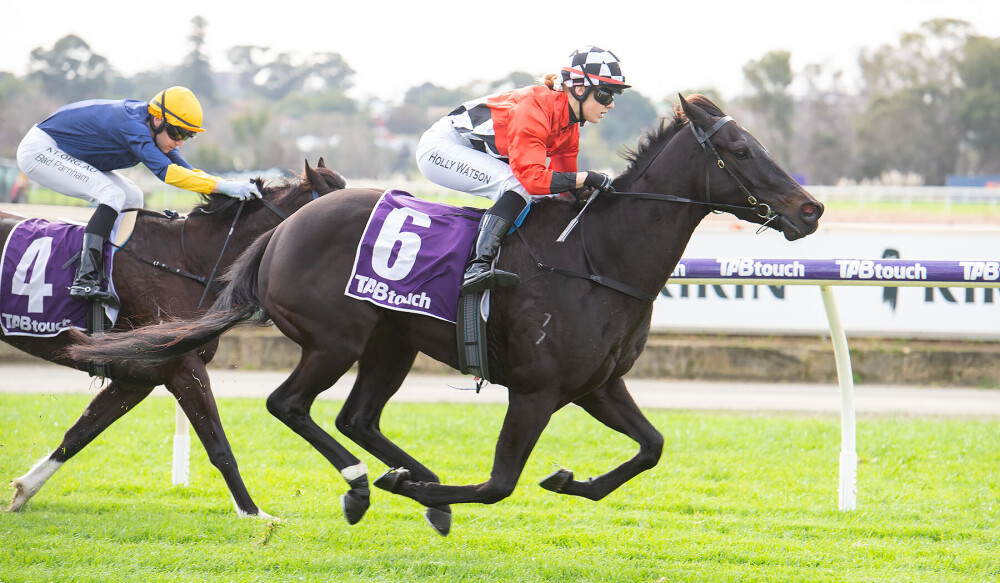