Ballantyne in Luck with Skater Boy

The son of Yarradale Stud stallion Bradbury’s Luck won the Countrywide Insurance Brokers (1300m) at Northam on the eve of the Tokyo Olympics.  His sire is named after Steven Bradbury who caused one of the biggest upsets in Olympic history winning a Gold Medal for ice-skating in 2002.

On-course broadcaster Darren McAullay described Skater Boy as a big, gangly galloper as he ambled to the front to score by over a length without being extended under Holly Watson.  “He has an ungainly action but rolls clear at the 300-metre mark,” McAullay called.  “Although pretty green, he’s doing enough to get the money.”

Skater Boy (3g Bradbury’s Luck – Erangy Springs by Hurricane Sky) was catalogued for the 2019 Perth Magic Millions by Alwyn Park (as agent) and was purchased by Boomer Bloodstock’s Craig Rounsefell for $20,000.

Initially with Lindsey Smith, he transferred to the Karnup stables of former Fremantle Dockers footballer Hayden Ballantyne earlier this year and connections are hoping he goes in the same direction as his late-maturing half-brother Harry Thomas (Scandal Keeper) who ended up winning 7 races and prizemoney of $427,600.

He races for a syndicate managed by Anthony Jardim who also has a Bradbury’s Luck filly foal from Lob City (Vital Equine).  Her dam won at Ascot and Belmont for Dockers champion Peter Bell.

Ballantyne’s parents Graeme & Donna had won the LR Belmont Oaks (2000m) earlier this month with Chili Is Hot who is a daughter of Yarradale Stud sire Gingerbread Man. 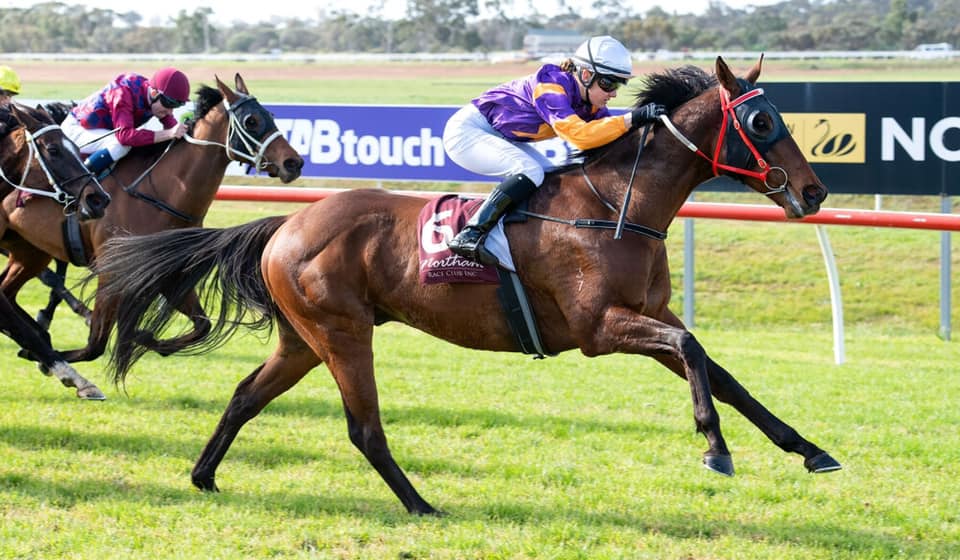