Home The Front Bar – TBWA Winner of the Week

The Front Bar – TBWA Winner of the Week

The Front Bar (Sessions) is the TBWA Winner of the Week after leading home a quinella for Oakland Park in the Allan Guelfi Plate (1000m) at Belmont on Saturday.

The Adam Durrant-trained front-runner defeated fellow Oakland Park homebred He’s a Sizzler (Sizzling) who put the writing on the wall for a bright future with Dan Morton when storming home from last.  La Galexia (Demerit), a third Oakland Park homebred and second entrant from Morton, was also doing her best work late into fourth place.

The Front Bar (2f Sessions – Visited by Viscount) is raced by Oakland Park’s Neville & Susan Duncan and connections were confident in the opening event on the Bolton Sprint program.  “She absorbed a lot of pressure last start and was beaten by a good one (It’sarayday),” stable foreman Jordan Rolfe said.  “She’s a progressive filly and has kept improving this campaign.”

Willie Pike replaced suspended jockey Clint Johnston-Porter and he jumped The Front Bar straight to the lead.  “It was a good effort,” Pike explained.  “She won it out of the barriers although I was a spot closer than I thought we would be in running.

“She was travelling well within herself so I wasn’t too concerned.”

Oakland Park sire Sessions has been represented by 32 individual winners with three crops racing in 2020-21.  Massimo started the season with a Listed victory in the Farnley Quality for Oakland Park and Durrant Racing and he was subsequently sold to Gangemi Thoroughbreds.

Sessions (Lonhro) stands for $8,800 at Oakland Park and he’s been firing in the last month with All Day Session, Ohbeeh & Timely Outburst also winning at Belmont plus Pepper Assault (Northam) and Slick Unit (Broome).

Oakland Park is always a factor at the Bolton Sprint meeting have won the feature event between 2007 and 2010 with Is Amazing (Laranto), Marasco (Scenic) and Grand Nirvana (Scenic) twice. 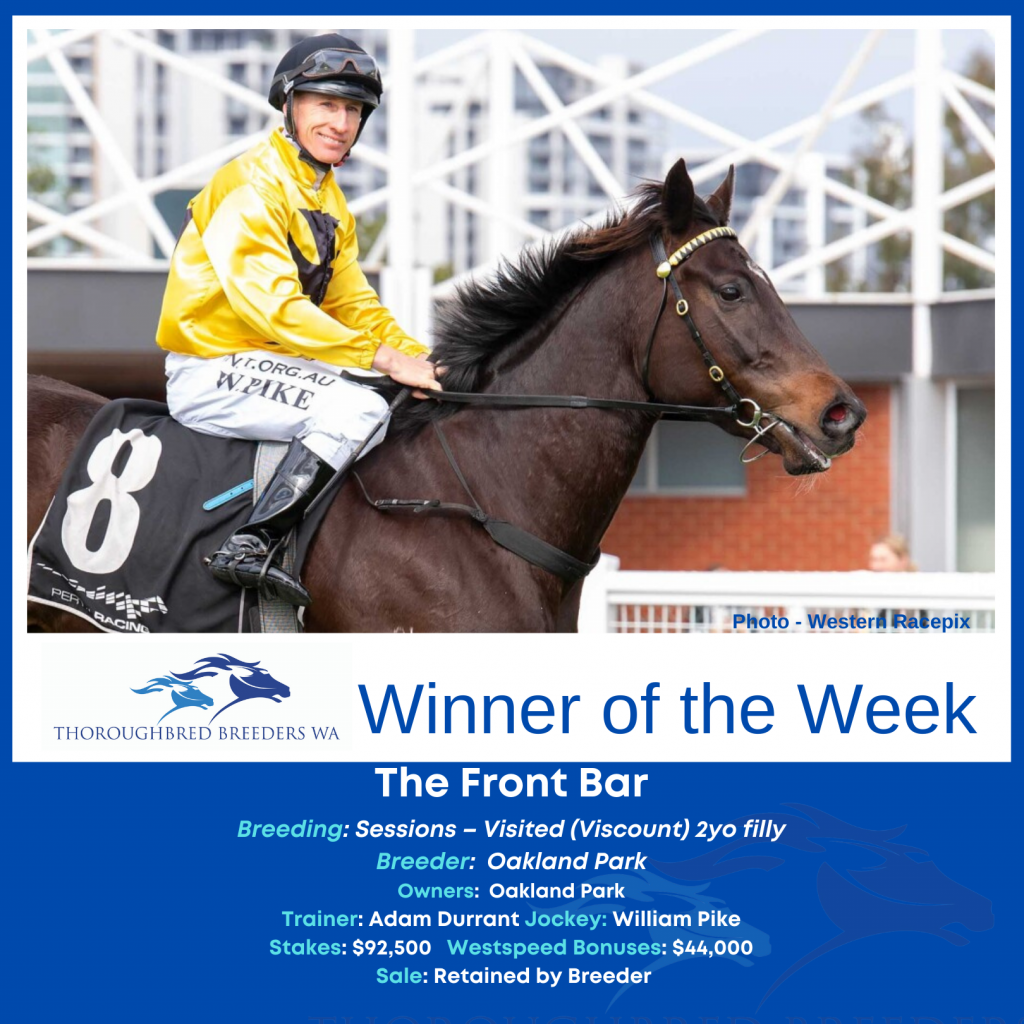 The Front Bar – Winner of the Week