All American stayer Dark Dream is on track to regain Group 1-winning form in the Caulfield Cup for trainers Ben and JD Hayes.

Dark Dream won the G1 Queensland Derby in 2018 before transferring to Hong Kong where he won twice despite being hampered by hard tracks.  Repatriated to Lindsay Park earlier this year, he raced second-up in the Neds Hcp (1600m) on Saturday and looked decidedly unlucky when beaten a length and change at Caulfield.

RV stewards reported he shifted in abruptly passing the 300m and was unable to obtain clear running over the concluding stages.  He went to the line not fully tested.

“He wasn’t 100% on the hard tracks in Hong Kong and wasn’t letting down,” Ben Hayes said.  “He was competitive at first but started jarring up.  The owner (Mr Hung) wanted a change of scenery and we were lucky enough to get him.

“He’s going really well and hopefully he can keep getting softer tracks down here in Melbourne.”

Dark Dream will be set for the G3 Naturalism Stakes (2000m) on September 18 but would have to win to gain a start in the G1 Caufield Cup (2400m) on October 16.  “We will be living the dream if he wins the Naturalism,” Hayes added.  “If he runs a nice race without winning, there’s always the JRA Cup and Ballarat Cup.”

All American’s 2yo sister to Dark Dream has been named Graceful Dream and she’s being prepared by trainer Allan Kehoe in NSW.  Their dam Buchanan Girl (Lion Hunter) has a yearling colt by All American and owner-breeder Mary-Ann Basson is expecting another All American foal from the mare in October.

“He’s only 80% fit,” trainer Robert Hickmott claimed.  “I liked the way he picked up the tempo to clock some nice sectionals before blowing out.  He got a stitch and is going to take plenty of confidence out of that win.”

Schabau will return to Flemington on September 11 for the Very Special Kids Plate (2500m). 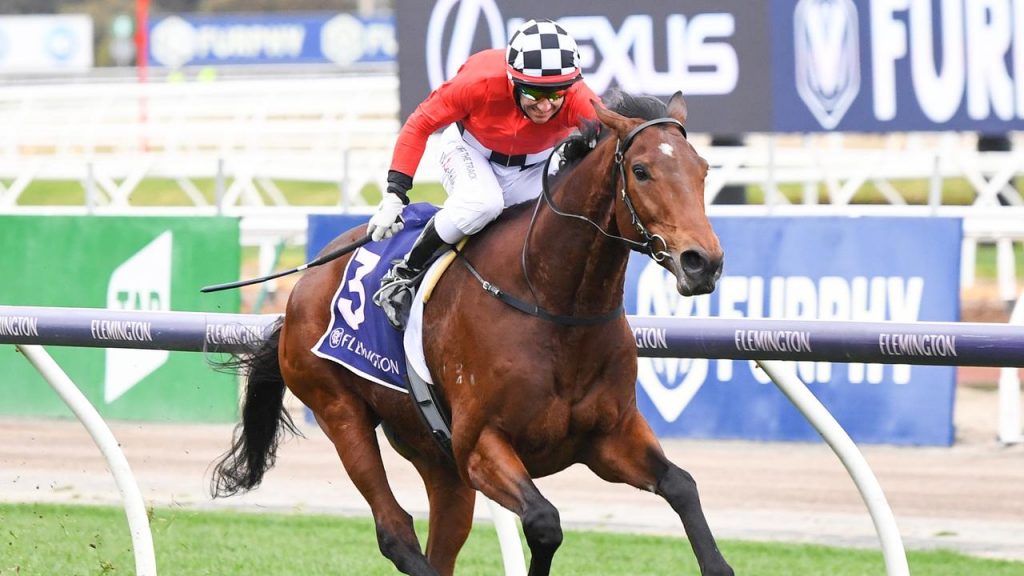