Strathmore Rose completed a Belmont double for mares by War Chant (USA) with a narrow victory in the Crown Perth Hcp (1000m) on Saturday.

The Yarradale Stud champion had sired Blue Horse to a much easier victory for owner-trainer Ash Maley on Wednesday.

Great Southern conditioner Roy Rogers was confident with Strathmore Rose but became concerned when she gave the barriers a right old bang just before they jumped.  “She’s doesn’t like anyone in the gates with her and I think she listens to the starter and anticipates when they’re going to open.

“I said to Madi (Derrick) not to panic as they would go really quick.  I also told her to use the whip in her left hand because she’s off to Sydney and will need to ride that way over there.  She was a little bit hesitant but kept the mare balanced and put her head down right on the line.”

Strathmore Rose (4m War Chant – Queen’s Gem by Hussonet) was bred and sold by Yarradale owner Ron Sayers for $52,500 at the 2019 Perth Magic Millions and he kept a share in a stable syndicate managed by Rogers.

Her full-sister I Am Boudica won a Bunbury 3YO Classic and other feature-winning fillies in the pedigree include Seattle Gem (AJC Furious Stakes), How About That (VRC Lady Mayoress Plate) and Anacarde (SAJC Hill-Smith Stakes).

Derrick settled the winner in a perfect spot behind front-runner Olga Louisa.  “She rolled off just enough to get through and that worked well but I was a bit out of practice using the whip on the left,” the 2.5kg apprentice admitted.  “I’m transferring to Kris Lees next week and will have to learn to be strong with both hands.”

Blue Horse was specked from $14 into $9.50 before storming home to win at Belmont’s midweek meeting for Maley.  “She has a fair few quirks but has a lot of ability and has been working really well,” the Gingin trainer said.  “She’s the only horse I own outright so we’ve got a bit of pocket-money for the Broome Cup.” 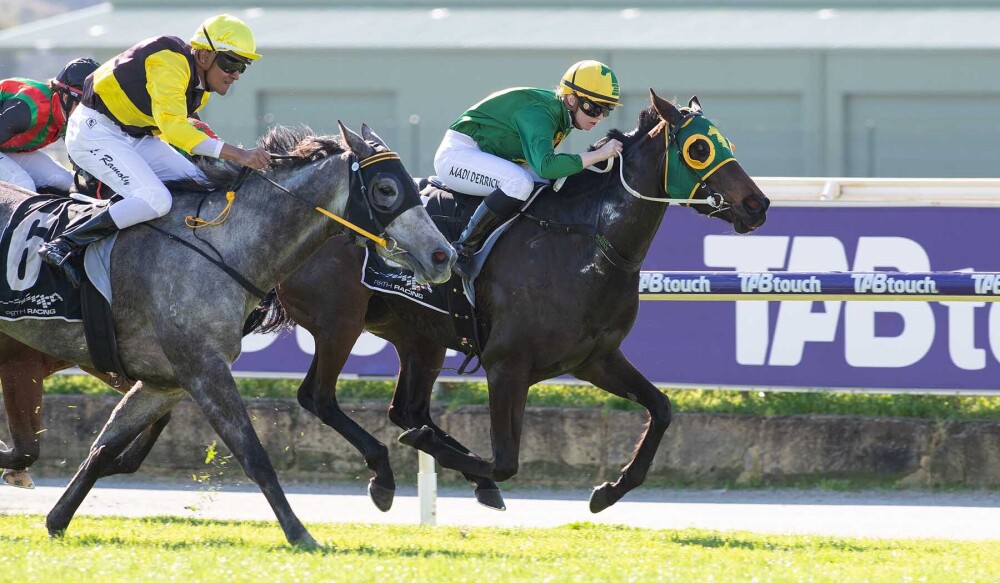