Bellbridge Park’s Michael and Siobhan Campbell unveiled a black-type prospect on Wednesday when Bitofmerit scored a resounding victory at Belmont.

The Demerit debutant was always travelling like a winner for Lucy Warwick after landing outside fellow first-starter Champagne Dame (War Chant) in the Amelia Park Lodge Hcp (1000m).

Bitofmerit is a homebred for the Myalup couple from the penultimate crop of former Taunton Vale stallion Demerit.  “I realised he had plenty of ability from his first fast work,” Michael Campbell told The West Australian.  “I’ve handled him patiently and Lucy said he felt very powerful today.”

The Campbells have dined out on the family for generations.  His dam Beersheba Belle (Charge Forward) has foaled four winners from five to the races.  Second-dam Saracen Belle is a three-quarter sister to Machine Gun Tom (Corporate Raider) who carried their Pink & Lime colours to a Group 1 triumph in the 1998 Railway Stakes.

Thursday’s Northam maiden winner Flicka’s Chance is another with links to Bellbridge Park.  The lightly-raced gelding was backed into a $2.40 favourite first-up after a five-month spell for owner-breeders Livio and Renato Divitini.

Flicka’s Chance (4g My Admiration – Althere by Dehere) was part of the Bellbridge consignment (as agent) to the 2019 Perth Magic Millions but was retained and placed with trainer Steph Bakranich after failing to reach a $30,000 reserve. 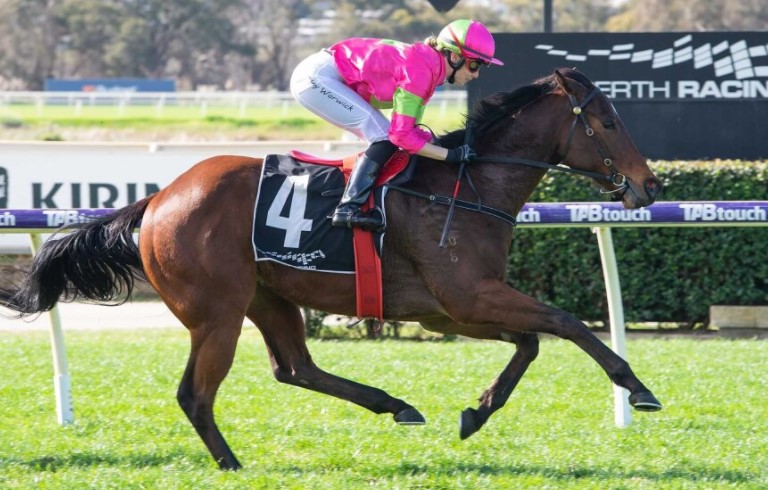