Even by its own high standards, Oakland Park has raised the bar in both Melbourne and Perth this week.

The south-west nursery’s interstate connection can go to another level deeper into the spring carnivals.  Bruckner will be set for the G1 Golden Rose (1400m) at Rosehill on September 25 and G1 Coolmore Stud Stakes (1200m) at Flemington on October 30.

Bruckner was bred and sold by Oakland Park’s Neville and Susan Duncan for a sale-topping $725,000 at the 2020 Inglis Premier in Melbourne.  He was consigned through Blue Gum Farm and was purchased by Aquis Farm owner Tony Fung.

“He had every opportunity to be beaten, but it looked like his brain switched on about 200 metres from the finish and he decided he wanted to be a racehorse,” Neville Duncan said. “It was great to see him dig deep like that and it’s a promising sign for his future.”

Blue Gum’s Phil Campbell described Bruckner as untapped.  “He’s a cracking colt and sold accordingly as a yearling.  The Duncans have bred a number of good horses and we’re really looking forward to prepping their four yearlings for next year’s Melbourne Premier.”

Superstorm’s Feehan victory sets up a showdown with Zaaki (GB) in the G1 Underwood Stakes (1800m) at Caulfield on September 25 ahead of a grand-final in the G1 Cox Plate (2040m) at Moonee Valley on October 23.

The Peters Investments homebred has more than one link to Oakland Park.  He’s the fourth Feehan winner for jockey Damien Oliver – the first was aboard Oakland Park champion Northerly in 2001.

“We were very pleased from the moment he arrived from WA,” trainer Danny O’Brien said after the narrow victory over Elephant (NZ).  “It’s been a pretty straightforward preparation and I will speak to Bob Peters to decide where the horse will be best placed.”

Peters catalogued Superstorm’s dam Stormy Nova (Metal Storm) for the 2017 Magic Millions National Broodmare Sale and she made $45,000 to the bid of Belmont Bloodstock acting for Oakland Park.

Stormy Nova completed a Group 3 double at Ascot in 2004-05 winning the Champion Fillies Stakes and Sir Ernest Lee-Steere Classic.  She has a yearling colt by Sessions and her last cover to the Oakland Park resident was in February 2021.

Sessions added a second Saturday winner in a row at Belmont for Oakland Park when his consistent sprinter Ohbeeh scored a front-running victory in the Amelia Park Hcp (1400m) yesterday.  The latest strike improved his record at the track to 4 wins and 8 placings in 14 starts.

Oakland Park homebred 3yo Policiere (Safeguard) had resumed with a first-up victory in the Vale Neil Cayley Plate (1000m) at Belmont last Saturday.  The Pearce Racing-trained filly has several avenues towards a black-type target like the LR Burgess Queen Stakes (1400m) at Ascot on Tuesday, November 2. 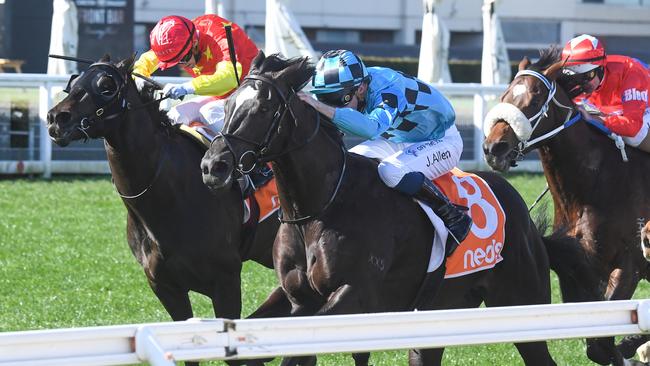