Yarradale Stud celebrated a great start to the season when its stallions Gingerbread Man, Bradbury’s Luck and War Chant (USA) were all respresented by a winner at Belmont on Wednesday

The trio had combined to sire 10 individual winners during August and it went to another level with a treble on the first day of spring.  September 1 also commences the covering season and the rush of winners has enhanced the books of all three residents.

Red Fifty Three (3g Gingerbread Man – Lady Valorem by Ad Valorem) claimed the first leg on Wednesday with an on-pace victory in the TABtouch Better Your Bet Maiden (1200m).  He sat outside the leader Nitro Fred on debut and lived up to an odds-on quote with a strong gallop through the line.

Grant and Alana Williams train him for a large syndicate managed by Elio Galante and he won’t be long repaying a $42,500 price-tag from the Yarradale draft at the 2020 Perth Magic Millions.  The chestnut’s part-owners include basketball champion Damian Martin who wore No.53 for the Perth Wildcats, hence the name.

“He’s a speedy customer and it’s always good to train a horse that has a crack,” Grant Williams said.  “He’s does everything right but we won’t do too much with him this time – maybe just one more run.  He cops all the work and eats up but is probably still a prep away.”

Gingerbread Man sired Red Fifty Three from Lady Valorem (Ad Valorem) who is owned by Yarradale assistant stud manager Sue Hanratty.  He is the mare’s first foal and she has a 2yo colt by Bradbury’s Luck, a yearling filly by War Chant and filly foaled last month by Gingerbread Man.

“He’s a big, long-striding horse and I was happy when he was left alone in front,” Dan Pearce said.  “I knew he would be hard to run down once he got rolling and was allowed to bowl along.

“He had a problem with his hind-quarters and the girls Equissage him every day.  He also had a respiratory issue that’s been helped by the crossover nose-band and tongue-tie.  He’s raw but very capable and I can see him progressing through the grades this season.”

Call Again (5g War Chant – Lip Service by Marooned) completed the treble with a searching final surge in the Amelia Park Hcp (1400m).  He tracked wide throughout but had enough in reserve to nail Run D’Affaire Run (Gingerbread Man) by a neck.

“I left it to Lisa (Staples) and he always looked to be travelling well for her,” trainer Rhys Radford said.  “He had been good in both runs since returning from a spell but he doesn’t have any wet-track form and I was a bit worried when it came up a Soft 7 today.” 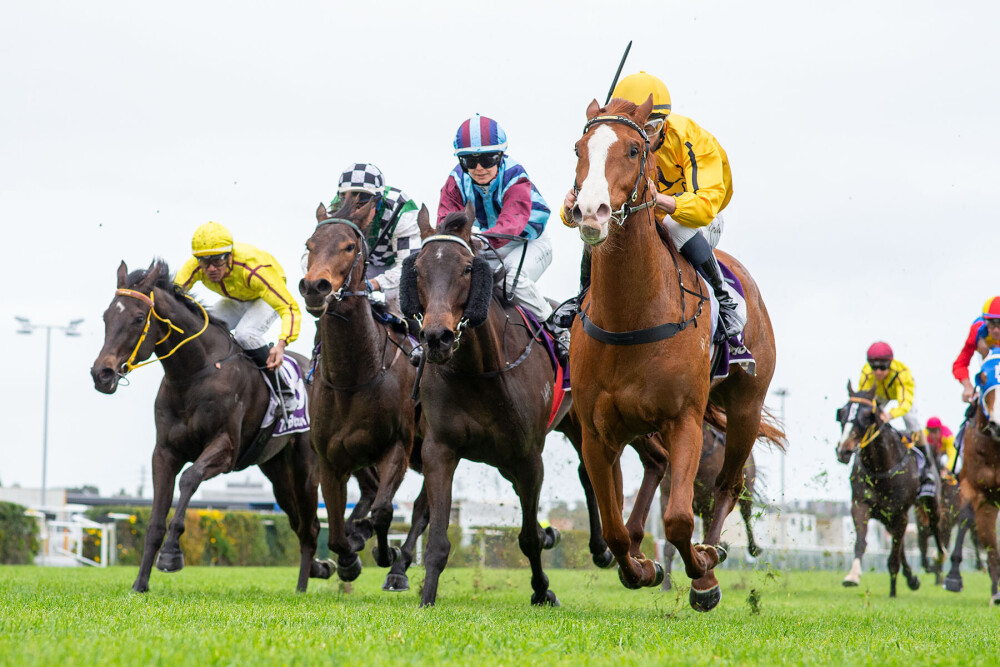