Fastnet Rock stallion Awesome Rock is equipped to make serious progress with his 3yo crop in 2021-22 following a promising start this year.

Gold Front Thoroughbreds owners Alan and Sue Olive bred Awesome Rock and retained standing rights after a career that peaked in the G1 VRC Emirates Stakes (2000m) at Flemington.  “They weren’t going to be early precocious types so we’ve been pleased with their development,” Sue said last week.  “The feedback has been positive and so are the calls for bookings.”

His second crop were popular with trainers at the 2021 Perth Magic Millions selling to $130,000 in the Swan Valley.  Neville Parnham paid top-price to Gervase Park for the half-sister to Takanori (LR WA Breeders’ Classic) and she has been named Truly Awesome.  Her 3yo full-brother Rokanori looks another nice type for Awesome Rock and a syndicate headed by Neil Pinner after winning a Lark Hill trial last month.

Bindoon-based breeder Jamie Turner received a free service to Awesome Rock this season when he won a competition to correctly guess the combined weight of Gold Front manager Mark Wilkins and a baby colt by Rommel.

Turner and his wife Dale operate Australian Premium Feeds and supply Gold Front with all their chaff and hay requirements.  “I was spot on at 157kg,” Turner trumpeted.  “We’ve just bought a maiden mare named Cuban Mint from an online sale for the cover to Awesome Rock.”

Cuban Mint (Mossman) was bred by Gerry Harvey and won a Sunshine Coast 3yo maiden for trainer Liam Birchley.  She’s one of four winners from a half-sister to Brisbane Stakes performers Pyramids (Anabaa) and Eminent Cheval (Mukaddamah).

Mystical View was a Belmont winner when racing second-up for Gold Front and wasn’t far away from earning black-type when fourth in the LR Birthday Stakes last month.  “We went to the Winter Sale to pick out the best of the best and Bob (Peters) is the master,” Sue said.  “You would go a long way to beat him.”

In more good news for the Olives, Awesome Rock’s dam Awesome Planet (Giant’s Causeway) delivered a colt by Vinery sire Exceedance in the Hunter Valley last month.  She boards at Cannon Hayes Stud and will be bred back to Ole Kirk.  “We’re very happy with her Exceedance foal,” Cannon Hayes owner David Morrissey said.  “He’s strong with plenty of leg and a lovely profile.  The dam’s doing a good job.  She’s not a big mare but Exceedance has put some size into this colt.”

Hoofnote:  Gold Front galloper Admiral Promo claimed more silverware in the Moora Cup (1800m) on Saturday.  He was coming off a narrow victory in the Toodyay Cup (1850m) last month.

Admiral Promo (My Admiration) has a yearling half-sister by Awesome Rock and he gave comeback jockey Kate Witten a welcome return to the winning enclosure at Moora following a fall at Belmont in January 2020. 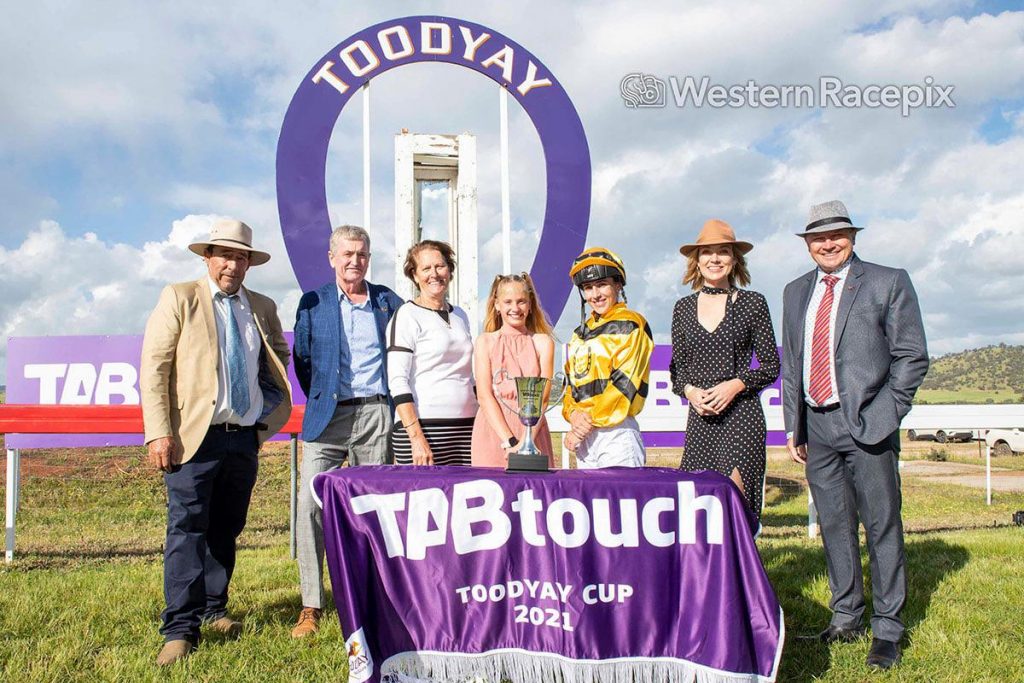