Kissonallforcheeks added another dimension to Dawson Stud’s summer carnival goals with a comprehensive victory at Ascot on Saturday.

The Dan Morton-trained $2.30 favourite didn’t see any sign of the inside rail but was much too good for her rivals in the Crown Sports Bar Hcp (1400m).  She tracked into the race approaching the corner and kept up a strong gallop under Clint Johnston-Porter to score by a length from Albany veteran Luke’s Gold.

Kissonallforcheeks (Written Tycoon) had been beaten a nose at Belmont in September and took vast improvement from that first-up outing after a six-month break.  “The wide draw wasn’t ideal but it was good to see her relax with the ear-muffs,” Morton said.  “She’s maturing and her demeaner is good compared to the early days.”

Johnston-Porter confirmed Saturday’s race looked a tricky one on paper with the prospect of a slow tempo.  “There wasn’t a game plan.  It depended on how she jumped.  I took her back to last and once I saw Kaptain Kaos on our inside, I knew the race was all over.”

Kissonallforcheeks has won 7 of her 13 starts for prizemoney of $497,040 boosted by Westspeed bonuses of $154,240.  The highlights last season were Listed victories in the Sir Ernest Lee-Steere Classic and WA Breeders Classic.

There are several other Dawson Stud graduates campaigning towards summer targets including Above The Peg, This’ll Testya and Dark Assault.

Above The Peg (Blackfriars) was prepared at Dawson’s Myalup base for the 2020 Perth Magic Millions on behalf of Anita Vale owners Robert and Ann Anderson.  He won a Northam maiden on debut last week leaving trainer Simon Miller in no doubt he’s up to black-type company

“He will improve considerably and show up over longer distances later on,” Miller predicted.  “But his immediate missions are the (LR) Fairetha Stakes and (G2) WA Guineas.”

Above The Peg sold for $170,000 in the Swan Valley last year and he’s a half-brother to this year’s G1 Oakleigh Plate winner Portland Sky (Deep Field) who will cover his first mares at Widden Stud in 2022.

This’ll Testya (Testa Rossa) holds a Group 1 nom for the Winterbottom Stakes following a first-up victory at Belmont on September 11.   She showed a glimpse her best form in front and trainer Adam Durrant believes we still haven’t seen the best of the mare albeit with a proviso.

“We may never see the best of her because she can test the boundaries,” he cautioned.  “I was a bit worried today coming off a trial on Monday and she has been a pain for connections in the past.  But we’re managing her now and she will have a quiet time before getting wound up again for an assignment at Ascot.”

This’ll Testya was bred and sold by Dawson Stud for $42,000 at the 2017 Perth Magic Millions.  Her dam Camille’s Girl (Flying Spur) is from a half-sister to Katima (G2 Silver Shadow Stakes) and had been purchased for $33,000 at the 2013 Inglis Easter Broodmare Sale.

Dark Assault (Statue Of Liberty) is another Dawson graduate ready to fulfill the potential he showed when placed in the LR Perth Stakes and G2 Karrakatta Plate over 18 months ago.  He won the Sky Racing Provincial Championship Final at Belmont on May and will resume for trainer Roy Rogers next month.

“He was still maturing and hit a flat spot this time last year,” Rogers said earlier this week.  “He will start off in a Ratings 72+ race and we don’t’ have any specific targets but he thrives on bush training and has gone ahead in leaps and bounds.”

Rogers bought Dark Assault for $35,000 on behalf of a syndicate at the 2019 Perth Magic Millions and they’ve banked $225,060 to date.  His 3yo half-brother Acefire (Ready For Victory) is also with Rogers and was placed in his only two starts at Belmont in May & June. 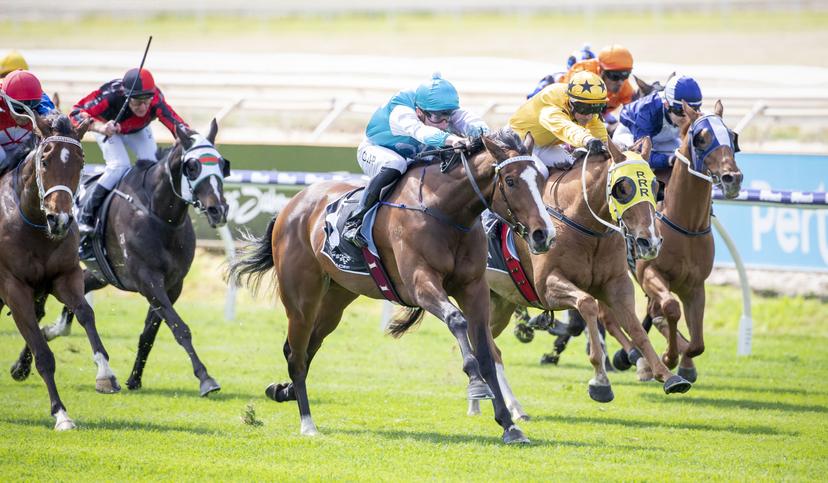