The Chris Waller conveyer-belt delivered another promising winner for a Noel Greenhalgh-managed syndicate when Volunteer scored a fighting victory at Doomben on Wednesday.

Volunteer is a lightly-raced son of War Chant (USA) and was sourced from Yarradale Stud at the 2019 Perth Magic Millions.  Waller’s bloodstock adviser Guy Mulcaster bought him for $100,000 to join Greenhalgh’s team of 50-plus horses on the books with Waller.

Dublin-born Greenhalgh, 57, made his fortune at the Brisbane markets and has raced black-type winners like Performer (Exceed And Excel) and Unforgotten (Fastnet Rock) with Peter Tighe of Winx fame. 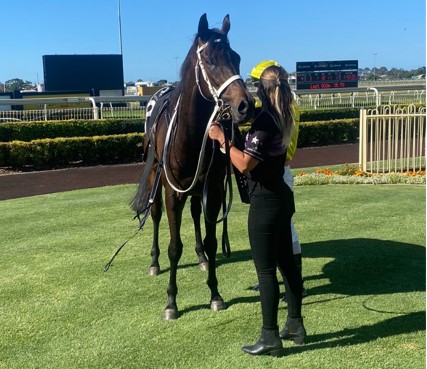 Tighe isn’t in Volunteer but Yarradale Stud’s Ron Sayers kept a share that began paying dividends in the Steamatic Maiden Hcp (1650m).  He had been city-placed twice during an initial prep earlier this year before resuming with an eye-catching fourth over 1350m at Doomben last month.

Volunteer (pictured) knuckled down to nail a three-way finish yesterday and one look at his pedigree reveals that will-to-win had already surfaced in spades through his older sister Dainty Tess.

The War Chant pocket-rocket never dodged a soul while earning a million dollars for trainer Dan Morton and a syndicate that cheered her home for 14 wins to Group 3 level in Perth and Adelaide.

“I would love a stable full of horses like Dainty Tess,” Morton recalled.  “She was very special.  We kept raising the bar and she kept lifting.”

Yarradale manager Bernie Hamill referenced the family when describing Volunteer as a yearling prior to the 2019 Magic Millions.  “He’s the same model as Dainty Tess – just bigger.  She’s only small but is all heart.”

Hamill reports their unraced 3yo sister Silver War is anything but Dainty.  “She’s almost 17 hands and has just gone into training with Dan.  She kept growing so we gave her time and he won’t be rushing her, either.”

Their dam Classic Smile (Bletchley Park) won a Belmont juvenile for Sayers and Nic Giorgetta and her latest foal is a colt by Playing God born in August.  Dainty Tess missed to Pierro last year and everyone at Yarradale is hoping she’s positive after a recent return cover to him at Coolmore Stud.