Home Smith Salutes with son of All American

Smith Salutes with son of All American

American Salute’s consistency has been rewarded with a well-deserved victory in the St Johns Park Hcp (1400m) at Hawkesbury.

The son of All American rarely runs a bad race with 4 placings in 8 starts this prep and he profited from a perfect ride by Jason Collett on Sunday.  Trainer Matt Smith booked Collett for the first time on American Salute and the gelding settled behind the speed before prevailing in a three-way photo-finish.

“Jason rode exactly to instructions,” stable rep Amy Burke said.  “He sat in the first four and let the others go when they kicked in front.  It’s been a while since he won and the sting out of the ground helped today.”

American Salute races for a syndicate managed by Matt’s wife Melissa and has earned $150,000 after graduating from Rheinwood Pastoral for $65,000 at an Inglis Classic Yearling Sale.  “He was a bit of a serial offender early on,” Smith recalled after a Kembla Grange win last year.  “He would hang and run off the track but we’ve managed to keep his mind on the job since then.”

His dam Reverenza (Commands) won 6 races for Team Hawkes and was stakes-placed in a LR Glenlogan Stud Stakes at Eagle Farm.  The All American – Commands cross has a 72% winning strike-rate

All American’s first WA-bred crop at Geisel Park was highlighted by three 2yo winners before Xmas and there are several ready to rumble in his second.  Dion Luciani trained two of those early first-crop winners – Our Danni & Too Spicy – and among his second is the promising All American – Tenko (NZ) half-brother to Devine Beast.

Luciani paid $40,000 for the colt at the Perth Magic Millions in February and his name is due back shortly from the Stud Book.  Perth’s King of The Kids has won three of the last four Initial Plates with Amarillo Rose (Slater), Bumper Humper (Alfred Nobel) and Pot Shot (Demerit) last Saturday.

Geisel Park also welcomed an All American full-sister to G1 Queensland Derby winner Dark Dream last Friday.  Another of his well-bred foals on the ground at Myalup is the filly from Zedfire Express (Danehill Express) who is closely related to Group 1 star Behemoth. 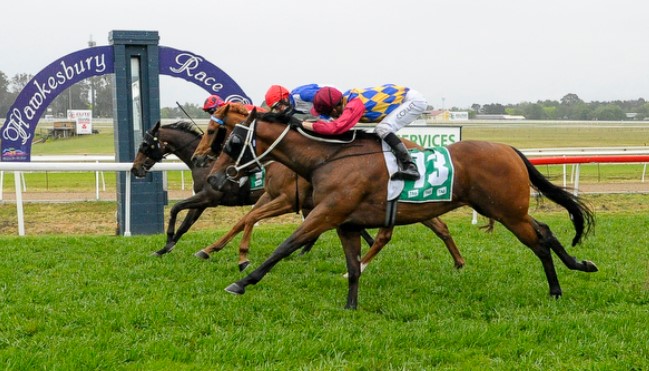 AMERICAN SALUTE (outside) arrives in time to win at Hawkesbury