Awesome Rock is trending in Perth with Searchin’ Roc’s winning the G3 Champion Fillies (1600m) at Ascot on Saturday and Cold Shizzle leading home a quinella for the Gold Front stallion at Belmont on Wednesday.

Searchin’ Roc’s (3f Awesome Rock – Still Searchin’ by Trade Fair) has won five of her seven starts and the Champion Fillies followed a black-type first in the LR Belgravia Stakes (1400m) in October.  Now rated the top 3yo filly in Perth, she is on assignment for the G1 Kingston Town Classic (1800m) at Ascot in a fortnight.

“We will bypass the (G2) WA Guineas,” trainer David Harrison said.  “She’s too lightly-framed to back-up so it’s straight into the Kingston Town.” 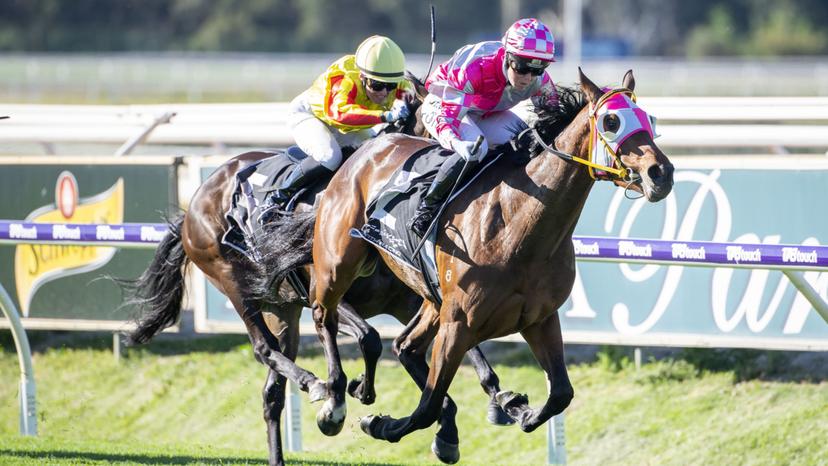 Searchin’ Roc’s (pictured winning the Champion Fillies by Western Racepix) is on the fourth line of betting in the weight-for-age classic at $13.  “I told Kyra (Yuill) not to go too early,” Harrison added.  “She won’t get 1800m if she leads.  She’s a better chaser and it was a super effort today.”

The son of Fastnet Rock followed up with a one-two finish in the Crown Perth Maiden (1200m) yesterday when Cold Shizzle defeated Gold Front’s homebred filly Beauty in Me.  “He has a devastating turn of foot,” trainer Darren McAuliffe confirmed.  “But he has to switch off.  We were riding him too positive last prep.”

Cold Shizzle (3g Awesome Rock – Fo’ Shizzle by Universal Ruler) is a homebred for McAuliffe and his Impressive Racing partner Kevin Berry.  “He’s still a bit new so we will head for a Saturday race and then put him away.  He can go through the grades next year.”

Fo’ Shizzle was runner-up in the 2015 Belmont Oaks and McAuliffe has nominated her 2yo colt Bleecker Street (Manhattan Rain) for the $100,000 Crystal Slipper Stakes (1100m) at Ascot this Saturday.

Gold Front completed a winning week with its 2020 Perth Magic Millions graduate Paigey’s Turn at Narrogin on Thursday.  The 3yo Choisir filly was set alight by Kyra Yuill at the 600m pole and sustained a long sprint to win the Men’s Health Matters Maiden Hcp (1720m).

Paigey’s Turn was purchased by Ben Randall for $25,000 in the Swan Valley.  Her dam Fine Approach (New Approach) won 6 races at Morphettville for trainer Ryan Balfour and she was sold to Belmont Bloodstock (as agent for Gold Front), with a PPT to Choisir, for $80,000 at the 2018 Magic Millions National Sale.

Fine Approach has an Awesome Rock 2yo filly named Rockon Molly with Ascot trainer Robyn Lockwood and the mare has a yearling colt by Awesome Rock.

Reaction was also in the groove for Gold Front at Narrogin when he broke a long losing run in the Men’s Health Initiative Hcp (1190m).  A veteran of 68 engagements for Lark Hill owner-trainer Des Waldock, he is by Redoute’s Choice sire Slater who was foundation sire for the Olives shortly after their Breera property opened for business over a decade ago.